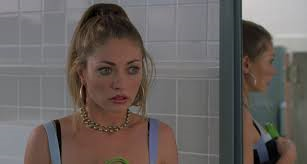 Julie Freeman is the main protagonist of the 1999 teen black comedy film Jawbreaker.

She is portrayed by Rebecca Gayheart

Member of The Flawless Four

Julie attended Regan High School with her friends cruel and self-absorbed Courtney Shayne, dimwitted Marcie Fox, and kind-hearted Liz, where the four of them were a popular group of girls known as "The Flawless Four". While Courtney was the leader of the group, she ruled the school with terror, while Liz was popular due to her kindness to everyone, which made people call her the Princess Diana of Reagan High. Julie was a member due to being attractive and Liz's best friend. At some point she begin dating Zack Tartak, an actor and member of the school's drama club.

One morning on Liz's 17th birthday, Julie, Courtney, and Marcie, broke into Liz's house while she was sleeping and her parents were gone, they then woke her up and kidnapped and gagged her mouth with a jawbreaker as a prank for her birthday. After putting Liz in the trunk of Courtney's car, they drove to a diner intending stuff Liz's mouth full of pancakes and then tie her up to the flag pole at school in her underwear. But when they arrived at the diner and opened the trunk they discover to their horror that Liz has died, due her choking on the jawbreaker.

While Julie feels assumed about causing Liz's death and wants calls somebody to about, but Courtney refuses. Courtney then calls the school pretending be Liz's mother and called Miss Sherwood, Reagan High's principal, tells her that Liz is sick, despite Julie's objections and Miss Sherwood saying that has already has a lot of absents, she believes the story and agrees to allow one of her friends bring over her homework. They then arrive at school where Courtney tells Julie and Marcie to normal despite Liz's dead body being the trunk of her car, and she reluctantly agrees along with Marcie.

Retrieved from "https://hero.fandom.com/wiki/Julie_Freeman?oldid=1781915"
Community content is available under CC-BY-SA unless otherwise noted.