Having fun with her friends.

To help Dan and Drago save the world from Naga. (succeeded)

Supporter
Julie Makimoto a.k.a. Julie Hayward (ジュリィ・ヘイワード, Juryi Heiwādo?) in the Japanese version, is one of the protagonists of the anime series Bakugan Battle Brawlers.

Julie Makimoto is a dark-skinned girl with long white hair in a ponytail and dresses pink and white.

Julie makes her first major appearance in episode 10 of the first series when she has a brawl with her childhood friend Billy where she calls him unbelievable and calls him a meanie.

Despite her efforts, Billy still manages to best her and he tells her to find a partner, saying that he will challenge her again.

Back at home, she laments her loss as she talks with her friends on the internet and expresses how frustrated at how cocky he was.

When Preyas asks about the Bakugan Billy used, she explains that it was a Cycloid that she lost against.

Later, she is partnered with Gorem as her partner Bakugan, but soon learns of Billy having been brainwashed by Masquerade into fighting against her. However, after losing several of her Bakugan to the Doom Dimension, she manages to snap Billy and Cycloid out of Naga's influence and return him to normal. Later, Dan faces Masquerade with it being the evolved Delta Dragonoid II vs Dual Hydranoid, but Drago loses, and he is banished to the Doom Dimension, with Dan going after him, refusing to be separated from his partner. When Masquerade then challenges Shun and Skyress next, Julie, Runo, and Marucho join him and lose on purpose to be sent to the Doom Dimension to join Dan and Drago. Once there, they are met by the Six Ancient Warriors, who offer them a deal: Defeat their respective Ancient Warrior that matches their Attribute in a Brawl, and if the Brawlers all win, they, their partners, and all the Bakugan banished to the Doom Dimension will be returned to Earth. Accepting the risks, the Brawlers are sent to battle their Ancient Warrior counterpart separately. Julie is pitted against the Subterra Ancient Warrior, Clayf, who uses an illusion of Julie's big sister Daisy as his Brawler in Julie's test. When Gorem finds himself losing against Clayf, Julie realizes her flaw regarding herself and Daisy, and overcoming it, she allows Gorem to evolve into Hammer Gorem, defeating Clayf, who commends Julie for her victory. Once the other Brawlers are victorious, the Ancient Warriors keep their end of the deal, and send the Brawlers, their partners, and the rest of banished Bakugan back to Earth. Once home, Julie learns that, while Dan and Drago defeated Apollonir, they need to defeat the other Brawlers for Drago to evolve again. Julie is more than happy to throw down with Dan, and when Dan successfully defeats Julie, Runo, Marucho, and Shun, Drago evolves into Ultimate Dragonoid.

Masquerade then calls out Joe and Wavern for a rematch, but Dan and Drago offer to face him instead, discovering that Hydranoid has also evolved into Alpha Hydranoid. After several tough face-offs that ended in draws, Dan and Drago come out on top and defeat Masquerade and Hydranoid. When Dan then offers Masquerade a chance to join the Brawlers, he refuses, revealing he's already a part of them as he reveals his true identity to be Alice, to Julie and the other Brawlers' shock. After Hal-G appears to explain how Alice and Masquerade are one and the same, Alice prepares to leave out of guilt for Masquerade's actions, but while Julie wants her to stay, Shun seals Alice's decision once and for all with harshly saying that Masquerade knew what they were up to because Alice was him. After Alice disappears and goes into reclusion, Julie reunites with her parents and Daisy, before Dan's mom contacts the other parents and tells them of the situation with the Bakugan, Vestroia, and the strange weather on Earth. Julie's parents react with shock, as does Shun's grandfather, but they soon understand what needs to be done, and allow Julie to go with the other Brawlers to the Vestroia portal that has appeared in the Pacific Ocean to confront Naga.

Once in Vestroia, they find that the six Attribute worlds have merged into hybrid worlds. After Shun and Marucho stay to deal with the Aquos/Ventus hybrids in Tayghen and Hairadee, Runo and Julie keep the Subterra/Haos hybrids and sisters Rabeeder and Tricloid busy while Dan heads to the Darkus/Pyrus world to face off with Centorrior and Druman alone. When Julie, Runo, Shun, and Marucho finally catch up to Dan, they find that he has been joined by Alice and Hydranoid. After Alice apologizes for making the Brawlers worry about her after her disappearance from guilt, Julie asks why Hydranoid is here with her, and Alice reveals that Hydranoid is her partner Bakugan now.

However, the Brawlers learn that Naga had lured them into his trap. While they are in Vestroia, he heads to Earth to go after Wavern. Luckily, Wavern is able to use the Infinity Core to bring the Brawlers home, and learning of Naga's hybrids approaching Wardington, they split up to deal with them, with Julie going after Tricloid. Joined by Billy and Cycloid, Julie and Gorem are able to defeat Tricloid, freeing her from being powered up by dark energy from the Silent Core by Naga. Afterwards, Tricloid departs to find her sister Rabeeder, finding her just after she was defeated in a joint effort by Alice, Klaus, and Christopher. After that, Tricloid and Rabeeder defect from Naga's forces and return home to Vestroia.

Julie later joins Dan and Runo with facing Centorrior and Druman, but when they see that Hal-G and Naga have found Joe and Wavern, Naga's Darkus/Pyrus hybrids prevent them from helping until they are slain. When Julie rejoins Joe and Wavern, Drago is forced to kill her and take the Infinity Core himself to keep it out of Naga's clutches, evolving into Infinity Dragonoid. However, when Naga starts to falter against Drago, Hal-G sends in the 5th Paladin to protect Naga. Julie and Gorem step up with the other Brawlers to deal with the 5th Paladin and defeat them, but their energy is absorbed by Naga to recover his own strength. At that point, when Naga taunts that any attacks they send at him will be absorbed by him, Dan decides to unleash Drago's ultimate ability, Dextra Attack, hitting Naga with all six Attributes at once. Unable to handle the vast about of energy, Naga's body begins to disintegrate, even as he begs for mercy, and with one final strike from the Battle Brawlers' guardian Bakugan, Naga's body is destroyed in a cataclysmic explosion, banishing his soul to the Doom Dimension for eternity, and freeing the Silent Core to be absorbed by Drago. Hal-G is also destroyed and reverted back to Alice's grandfather, Dr. Michael, but with Naga gone, it is time for the Bakugan to return home to Vestroia. With a heavy heart, Julie says goodbye to Gorem before throwing him one last time as he and the other guardian Bakugan, along with the rest of them, return home to Vestroia.

Come Bakugan: New Vestroia, Julie has taken over for Alice with working at the Misaki family restaurant after Alice and her grandfather returned to Russia. When Runo grows impatient over Dan, Shun, and Marucho going to New Vestroia without the girls of the original Battle Brawlers, she and Julie travel to Russia to reunite with Alice and attempt to use Dr. Michael's Dimensional Gateway to go to the Bakugan homeworld, but Dr. Michael reveals he hasn't perfected it yet. That night, Julie and Runo sneak into the lab and Julie powers up the portal, despite Dr. Michael's warnings, and Runo attempts to go to New Vestroia, but ends up as a spectral version of herself there. Julie remains with Alice and her grandfather until Dan and Runo return to Earth through the portal, but not without bringing company in the form of several members of the Vexos. After the Vexos members are sent back to New Vestroia, Julie assists with getting Mira Fermin and Baron Leltoy accustomed to Earth and all it has to offer until they can return to New Vestroia to help Marucho, Shun, and Ace Grit with stopping the Vexos from colonizing New Vestroia.

After the defeat of the Vexos and they being forced to return to Vestal, Julie is reunited with Gorem, but later learns of King Zenoheld having built the Bakugan Termination (BT) System in revenge for the failed colonization of New Vestroia. Julie is also aided by Billy when combating the Vexos as they hunt for the Attribute energies on Earth, but does little else to aid in the fight against the Vexos until Zenoheld, his son Hydron, and their mechanical Bakugan perish in the destruction of the Alternative that served as Zenoheld's final card against the Bakugan Battle Brawlers Resistance.

In Bakugan: Gundalian Invaders, Julie continues to support Dan, and helps newest Brawler Jake Vallory get used to being the new Subterra Brawler for the group after she retired from Brawling.

By the time of Bakugan: Mechtanium Surge, Julie has become an energetic news reporter for all the Bakugan action in the newly-opened Bakugan City, while still serving a supporting role to Dan, Marucho, and Shun. However, one day, as Julie, with her cameraman, are joining Runo and Mira to be taken by Kato to find Dan and the others, the genocidal combination Mechtogan Mechtavius Destroyer arrives in Bakugan City, and in one strike, obliterates the entire area, leaving nothing but a crater, and killing Julie, Runo, Mira, Kato, and hundreds more in the process before turning his attention to New Vestroia, killing Gorem, Hydranoid, Preyas, Elfin, and the rest of the Guardian Bakugan there, before he would set his sights next on Vestal, Neathia, and Gundalia to kill the rest of the Brawlers allies and friends still living on those worlds.

However, the last of the Nonet Bakugan in Betadron and Worton sacrifice their lives to allow Dan and the others to traverse the Current of Time back to the point before Mechtavius Destroyer departed to annihilate Bakugan City, allowing them to stop him, saving Julie, Runo, Mira, Kato, Gorem, Tigrerra, and the others who would've died, as Dan and Drago then have Dragonoid Destroyer blast Mechtavius Destroyer with a blast so powerful from the infinite energy that Dragonoid Destroyer had gained from the bonds of Bakugan and their Brawlers from all over the world, Mechtavius Destroyer is unable to endure it and is annihilated himself, screaming in agony and anguish as his body disintegrates, never to threaten the life of a Bakugan or their Brawler ever again, with Julie catching the whole thing on camera thanks to her cameraman.

After it is all over, Julie is with Runo, Mira, and the others awaiting Dan at a party being celebrated in his honor, but Dan and Drago were secretly leaving on a long-due vacation, leaving their #1 spot as the top-ranked Brawler to be filled by someone else as they decided to retire and leave things in the hands of the other Brawlers for the time being. 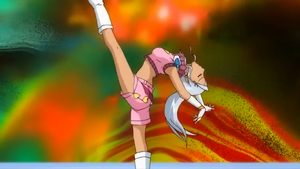 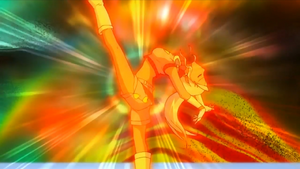 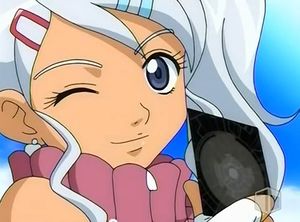 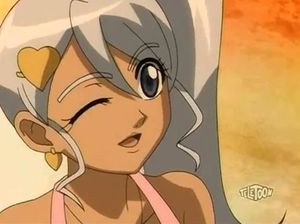 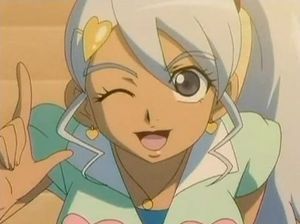 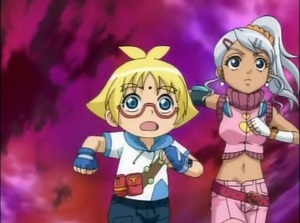 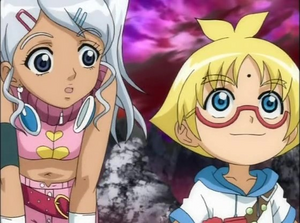 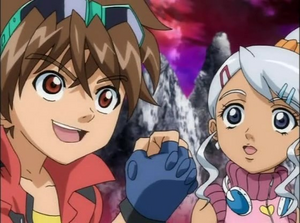