Julie Sigtuna is the main female protagonist of the light novel and anime series Absolute Duo. She is a princess from the Scandinavian country Gimlé and a first-year student at Kouryu Academy, as well as the Duo partner of Tooru Kokonoe. She is also an Avenger like Tor, who entered Kohryu Academy to become strong enough to avenge the death of her father, and has a scar on her back to signify this.

Julie is a very beautiful young girl. She is described by her peers as a doll, with her long silver hair coming down to her hips in a twin tail fashion and two black ribbon bells on each side. Her skin is very pale, described to be as white as snow, and she has ruby - red eyes. She turns heads every time she walks in public. It is very obvious that she does not know her own beauty. She wears a normal Kouryou Academy attire except when she's in the dorm with Tor, during which she wears a long-sleeved shirt.

Julie usually comes off as a very reserved and moving gracefully girl who giving off an almost mysterious aura. Julie is also a bit shy and quiet girl, rarely showing any emotions even when talking and initially being afraid to say anything to Tor, only doing so when they were in private. Despite this, she seemed to show a keen interest towards Tor from the start, who in turn already seemed to be instantly attracted to Julie's unique beauty when he first saw her. She is also very kind-hearted, being very polite to everyone she meets.

Julie often displays odd behaviour, largely out of naivety; she sees nothing wrong with sleeping only in a nightshirt and panties, claiming that they are her pyjamas simply because she sleeps in them. She does, however, later blush around Tor, likely because of her feelings for him. This naivety also extends to social affairs, with her not realising that things like feeding someone are very intimate things that only couples normally do, as well as initially believing that she could swim simply by watching everyone else do so. She also often fails to recognise the implied innuendo behind what she says (e.g. "The two of us fit together nicely.") though this is more due to the language barrier than anything else.

Julie is also very understanding; she didn't get upset with Tor when he told her about Lilith asking him to be her Duo, though she did briefly fear him leaving her. She is also very calm and willing to listen to Tor and his problems and because of this, the one she is most open to and can trust is Tor because of their Duo relationship and the fact that they have similar goals. Julie also hates being alone, to the point that she seems incapable of sleeping without someone in bed with her, which is why she always sleeps in the same bed as Tor despite his protests. She did the same thing with her mother when she lived at home. Julie also adores it whenever Tor affectionately strokes her head, since her father used to do the same when he was alive, and it was the last thing he did for her before his death.

Despite her feelings for Tor, Julie doesn't seem to mind that she's competing with several other girls for his affection; quite the contrary, she welcomes both Tomoe and Miyabi's feelings and desires for Tor to reciprocate them as long as she gets to be with him too, which is helped by the fact that Miyabi and Tomoe are both very close personal friends and always defer to her in matters regarding Tor. The only exception is Lilith, who annoys Julie due to her entitled attitude and desire to have Tor all for herself. Even in Lilith's case, however, Julie never gets violent or angry, instead doing subtle things that get in the way of her and Tor e.g. feeding Lilith through the mouth when she had asked Tor to do it.

Her Blaze is a Sword Type known as "Twin Blades" or ''Double Blades''. She is shown to be able to make quick consecutive slashes to put pressure on her enemies, and also very adept at swordplay.

The true power of Julie's Blaze. With this she can step/kick the air and maneuver midair which allows her to avoid attacks coming from the skies and attack airborne opponents.

Julie's Fang (Curse of the Fang) 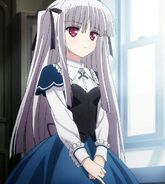 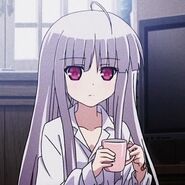 Julie in her nightshirt 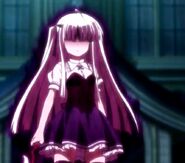 Julie staring at Tor
Add a photo to this gallery
Retrieved from "https://hero.fandom.com/wiki/Julie_Sigtuna?oldid=1651659"
Community content is available under CC-BY-SA unless otherwise noted.