To be with Gnomeo (succeeded)
To find the missing gnomes

Humanoid
Juliet is the daughter of Lord Redbrick and his late wife, the female leader of the Blue-Red Gnomes, Gnomeo's love interest and later wife, Nanette's best friend and the deuteragonist from the 2011 film Gnomeo & Juliet and one of the two deuteragonists (alongside Gnomeu) from 2018 sequel Sherlock Gnomes. She is inspired by Juliet Capulet of William Shakespeare's original play called Romeo & Juliet.

She is voiced by Emily Blunt who also voiced Tempest Shadow in My Little Pony: the Movie. 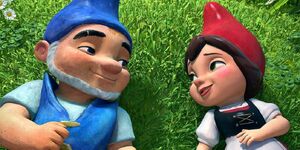 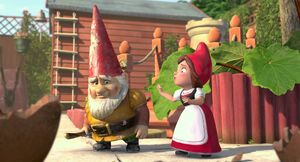 Juliet with her father Lord Redbrick 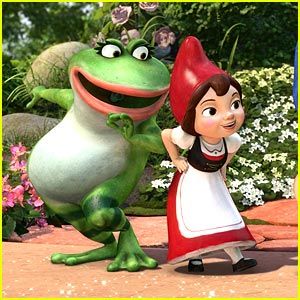 Juliet and her best friend Nanette