He was portrayed by Vincent Craig Dupree.

Off to New York

Joining his fellow students on the cruise to New York City, Julius is first seen fighting another male boxer, with Tamara Mason and Eva Watanabe (Kelly Hu) watching from the window above. Because of the two girls distracting the boxer, Julius easily beat him, also noticing the two girls. Soon after, Sean Robertson calls everyone into the cockpit of the ship, where he notices the dead bodies of Admiral Robertson and Jim Carlson, shorty before the deckhand(who is quite similar to that of Crazy Ralph) and Abel warns them of Jason Voorhees and that he could possibly be on the ship. While Charles McCulloch is oblivious to Jason, Julius believes it, and gathers some of the students to hunt him down.

While everyone is choosing weapons, Wade questions what weapon Julius is taking, to which Julius responds “Nothing... but this gun,” and everyone sets off to find Jason. While looking around, Julius encounters a flying ax, which comes close to chopping off his foot, and takes off to see where it came from, eventually coming across the corpse of Miles Wolfe, who had been stabbed through his side with a radio antenna. While Julius is surprised by this, Jason grabs him from behind and throws him into the ocean like a rag doll, seemingly killing him. However, Julius is seen to be alive all along, and hops in a life boat being rowed away from the sinking S.S. Lazarus by Rennie Wickham, Colleen Van Deusen, Charles McCullough, and Sean Robertson, as well as Rennie's dog, Toby.

After rowing the boat for several hours, the group comes to New York, unaware that Jason had also arrived as well. They are then mugged by two punks named Homes and Jojo, who rob them, scare Toby away, and kidnap Rennie, threatening to kill her if they follow. Julius at first wants to go after them, but is stopped by Charles, reminding him that they'll kill her, and suggests they split up and find the police.

She quickly manages to escape Homes and Jojo when Jason kills them both. After running around for a while, Julius finds a payphone and attempts to call the police, but is confronted by Jason. Julius then flees up a fire escape and onto the roof of a building, only to find there is no way to escape. Julius defends himself with his boxing skills, punching Jason by the face, chest, and gut over fifty times. Jason is completely unfazed by this, doesn't feel a thing, and gets angry after each punch, and barely flinching when Julius misses some punches.

Exhausted and with bleeding knuckles, Julius tells the killer to take his best shot. He waits for the right moment as Jason winds up and punches Julius' head off in one swipe, killing and decapitating him. Julius' severed head is later found in the police cruiser by Rennie, Sean, Colleen, Charles, and an Irish cop, which later falls onto the front seat and is destroyed with Colleen and the police car. 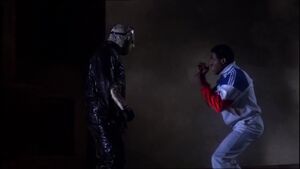 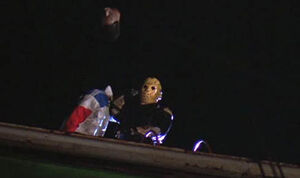 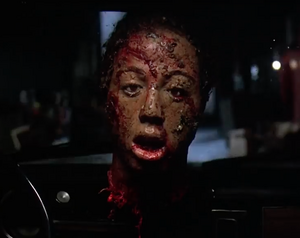 Julius' decapitated head in the police car.
Add a photo to this gallery

Retrieved from "https://hero.fandom.com/wiki/Julius_Gaw?oldid=2209784"
Community content is available under CC-BY-SA unless otherwise noted.