Jun (also known as Jun the Swan) is the team's electronics and demolitions expert. Her Bird Style is based off of the Swan.

While Jun never knew her parents, her father was American and her mother was Japanese. Jun grew up in the Shirayuki Orphanage where she met Jinpei, and they eventually came under the wing of Dr. Nambu.

In a possibly-apocryphal article in Fantastic Graphics TV Anime volume 3, it is stated that Jun's parents had died when she was a child and that she was taken in by an aunt, who also died (leaving her to wind up at the orphanage). Its canonicity to the original series is debated, as no one involved with the series seemed to have written the backstory and it was an answer to a fictional "interview" with the team members.

Jun is a young woman with dark green hair and green eyes. In the first series, her hair slightly extends beyond her shoulders, and curls up at the ends. Her hairstyle was slightly modified for both sequel series, to have her hair be straighter, slightly shorter, and be a somewhat brighter shade of green.

Her civilian clothing usually consists of a red-and-navy t-shirt with a pink number "3" insignia, as well as pink-and-white striped bellbottom pants. In the sequel series, her civilian uniform is changed so that she wears a pink crew-neck "3" t-shirt and white capri pants.

Her Bird Style features a pink dress, white elbow length gloves, white thigh-high go-go boots, and a white cape colored red on the inside. Jun's swan-like helmet features orange highlights and a light orange visor, as well as an antenna in the back.

Jun's design was heavily modified for the OVA remake. While still sixteen years old (as in the original series), Jun is designed to be taller and more physically developed, with a larger bust size. Her hair was also changed to be a short brown bob cut, as opposed to long and green.

Her Bird Style was also modified, with the dress being pink-and-white, with a split skirt. Rather than the "G" belt, she bears a modernized "G" symbol in the middle of the dress.

Rather than a numbered T-shirt, she wears a "3" necklace with her civilian clothing, a pink midriff-baring top and green striped skirt. She is also shown to wear a red and black motorcycling suit in her first appearance.

Jun's uniform in the Imagi film underwent various drafts, although an earlier design appeared to be a cross between her original uniform and the one seen in NTT Gatchaman: She would wear an armored pink-and-black dress, pink-and-black armored thigh-high boots, black gloves, and a black cape.

Another draft seen in other concept images had Jun wearing her OVA uniform, while the later animation tests and revisions of the trailer gave Jun her original outfit back. Her civilian look in storyboard reels seemed to also be undecided, although her hair was to be brown (as seen in a colored animation test).

Jun is a brave and independent young woman who likes to ride her motorcycle in her free time, when she's not busy working at the Snack J. In the battle against Galactor, Jun takes her role very seriously and tries to look out for her team.

Jun's style of Kagaku Ninpo uses agile movements that tends to include high kicks that expose her humerus and thighs. She often uses explosives and flail weapons. 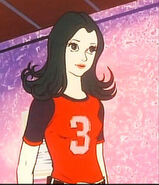 Jun the Swan as a civilian.

Jun and her teammates. 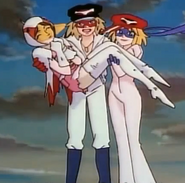