Hanging out with her sisters

Learn about how they were created (succeeded)

She is the younger twin-sister clone of Webby Vanderquack and May McDuck, who was created by Black Heron.

She was voiced by Noel Wells.

Like her sisters Webby and May, June is curious, intelligent, and wanted to know why she was created. Compared to May, she is the kinder, more sensitive clone. June is also bubbly, cute, fun-loving and caring as she loves her sisters very much. June is shown to be very forgiving towards Webby for knocking her out and stealing her identity to infiltrate F.O.W.L. and find the answers herself. Despite everything, June will always love her sisters Webby and May no matter what and after discovering Bradford and F.O.W.L.'s true intentions and learning the real reason why the triplets were made, June quickly switched sides to help her true friends and understanding who her real family is.

June wears a blue bow on the right side of her head. She wears a blue shirt with rolled-up sleeves, a blue sleeveless sweater vest, and a blue skirt.

As Clan McDuck find the Missing Mysteries of Isabella Finch while Donald, Della, Launchpad, Gizmoduck, and Darkwing set out to capture F.O.W.L. However, the two teams soon determine that the base is virtually empty of personnel, with the Missing Mysteries nowhere to be found. Startlingly, they come across two young Duck girls in a pair of tubes. Upon returning with them to McDuck Manor, they are able to verify that the pair, who introduce themselves as May and June, are in fact clones of Webby.

Beakley forbids the kids to interact with the clones, but Webby is naturally curious about the clones and lets them out of the room where Beakley locks them for safekeeping. Huey, meanwhile, struggles with the failure of the raid against F.O.W.L. that he planned, even snapping at Beakley, who refuses to answer him or Scrooge regarding what she knows about F.O.W.L. Webby shows May and June her room, and the family board, but the two are quick to contradict her statements about her "found family", and question her about her real relatives. Webby admits that she knows next to nothing, as for Lena and Violet walk in just as June is tampering with the board. Causing Lena tosnaps,leaving June running off in apparent tears, making Webby angry at her friend; after going to look for her clone "sister", Webby runs into Beakley.

However, Beakley's confession causes Webby to realize the depth of her "grandmother's" deception. As Bradford, Heron, May, and June come in, Bradford makes a deal to Webby to know about who she is, leaving Webby to reluctantly agree to help Bradford, her creator, as she was intended to, calling her April.

After June captures The Triplets (including Gandra, Gyro, and Ludwig), Dewey tells her that she and May cannot defeat Webby as she tells them that she is their worst nightmare, only to be revealed to have emotionally defeated Webby and tied-up off-screen, much to Dewey's dismay. This action is seen by both June and May, who realized that their whole purpose has simply been to reawaken a piece of paper. The Triplets become confused as the Papyrus could only be reused if it ended up in the hands of Scrooge's direct descendant. Ludwig reveals the truth: Webby is actually Scrooge's daughter; cloned directly from his DNA, causing everyone, including June and May (except Ludwig) to become shock about it. Having learned that their only reason for being was to help Bradford get the last artifact, May and June both feel remorse for what they did, but Webby convinces them that family is about caring for each other, fighting for them, and helping them that are then persuaded to help free Webby and the others to save the family, which they are now a part of. After the speech Webby gives to them, May and June free Webby and the others and help save their family.

As the heroes try to save Scrooge, the Sword of Swanstantine amplifies Bradford's inner evil into an increasingly monstrous form. He attempts to blast Scrooge, but Donald puts up a barrier and is joined in holding it by Della, Beakley, and the two sets of triplets, with May and June helps them.

Huey and Louie analyze Bradford's contract, and discover a loophole: it says Scrooge can have his family if he gives up adventure; however, as the McDucks always say, "family is the greatest adventure of all". The contract disintegrates, and Bradford loses the sword and is left powerless, fleeing only to find Magica, Glomgold, and the Beagles waiting for him. The magician then turns him into an ordinary Buzzard, and Scrooge's adversaries then depart rather than face his family, both genetic and found. As the whole group heads back home aboard the Sunchaser, Donald calls Daisy and says he's willing to bring them along on their planned trip. 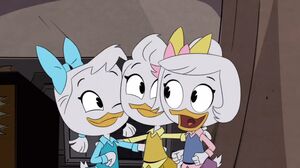 June hugs her sister May lovingly.
Add a photo to this gallery

Retrieved from "https://hero.fandom.com/wiki/June_McDuck_(DuckTales_2017)?oldid=2280929"
Community content is available under CC-BY-SA unless otherwise noted.