Save his parents (success).

Save the world.
Save his sisters (success).

Junito Cortez is a fictional character in the Spy Kids film series. Juni along with his older sister Carmen Cortez, is one of the series' main protagonists.

Juni, like Carmen, had no idea his parents were secret agents until the first Spy Kids film. Carmen acted as a bully to him when she baby-sat him, an example when she forces him to climb the monkey bars everyday and kicks him while he hangs from it, causing him to fall on his face. He is very self-conscious, and is obsessed with the television show, Floop's Fooglies and even has the action figures and draws his own fooglies. When Juni finds out that Floop is really a criminal mastermind that had kidnapped his parents, he adjusts to the news surprisingly well. As a result, Carmen begins to respect Juni more on their quest and gets her back for calling him names by calling her "diaper lady" because of her bedwetting problem. It was shown within the first two movies that Juni is able to mimic another person's voice (and laugh) perfectly as his mother taught him. Juni was called weak and defenseless, but rescued his parents, and saved the world and Juni is quite a hero and not scared anymore. Juni has warts on his fingers and has to put hand schitnazer and band-aids on his fingers. But got over his fears of everything.

In Spy Kids 2: The Island of Lost Dreams, Juni develops his first crush on the President of the United States' daughter Alexandra. There is a great deal of conflict between Juni and Gary Giggles due to Carmen's romantic interest in Gary. When Gary tries to take the Transmooker from Juni, the Transmooker is later stolen by Magna Men. Gary blames Juni for the theft. As a result, Juni gets fired from the OSS and loses position of their Best Spy Kid Ever. However, Carmen hacks him back into the organization so they can recover the Transmooker and gets him back his Level 2 badge. After they successfully save the Transmooker from Donnagon Giggles, Gary's father, Juni quits the OSS. Juni's robotic pet spider, R.A.L.P.H., is first shown in this movie near the beginning sections, but is later squashed by Gary Giggles, after he is sent to spy over him and his sister during the briefing of the Ukata Assignment.

In Spy Kids 3-D: Game Over, Juni is in retirement and is a private detective who usually gets money for people by his rank: $4.99 and he usually spends time in the treehouse with R.A.L.P.H. and his Spidermonkey from the Ukata assignment and he comes out of retirement after the President of the United States tell him that his sister is missing and he goes to the OSS to rescue his sister from her failed mission to shut down the video game, Game Over and the Toymaker has taken her mind into her game. Juni finds her, but it is no accident as he tries to read her mind and when she says her foot stinks, he knows she is near. The toymaker is manipulating Juni and the others, because of an interest in Juni's grandfather. Despite this, or rather because of this, Juni and the others manage to save the day by defeating/helping the Toymaker. Juni meets a girl named Demetra and develops a crush on her and when he find out she was the Deceiver, who fools players as she apologizes to him.

Spy Kids 4: All the Time in the World

In the fourth installment, Juni is seen assisting the new younger Spy Kids. He is grown up and came back to help them get time back after he was in retirement. Carmen is upset because Juni never called or told her where he was. He said he tried to strike out on his own and struck out. He continued to say he left because he thought that it wouldn't be cool to keep working with his sister. Carmen replies that was what would have made him cool. Juni is still slightly immature because when Carmen was frozen he made her pick her nose, and then took a picture of it to remember her. At the end, they become co-leaders of the new Spy Kids program.

Juni and Carmen in Spy Kids 3

Juni trying to unfreeze his sister and their aunt from their OSS badges.

Juni and Carmen in Spy Kids 2 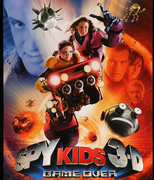