To deliver the baby girl (Succeeded)

Junior is the main protagonist of the 2016 Warner Bros animated film Storks. He is also Tulip's closet friend.

Junior's is the top delivery stork who's in line to become the next boss of Cornerstore. He accidentally activates the Baby Making Machine and produces an unauthorized baby girl, he and Tulip must make their first-ever baby drop.

He is voiced by Andy Samberg who also voiced Brent McHale and Jonathan Loughran from the Cloudy with a Chance of Meatballs and Hotel Transylvania franchises respectively.

Junior is a white stork with brown eyes.

Cornerstore is a place known for delivering babies and its employees are storks, along with other birds. The current CEO of Cornerstore, a stork named Hunter, discontinues the baby delivering business, seeing more profit by converting the company to a postal service. However, the last baby that was made before the baby production shut down is taken in by the company and they name her Tulip.

Eighteen years later, Tulip, now a teenager, is working to promote new ideas for Cornerstore, but they always backfire. Meanwhile, Junior, Cornerstore's top delivery stork, is about to be given his much coveted position as boss of Cornerstore while Hunter is about to be promoted as Chairman. In order to be promoted, Hunter demands that Junior discharge Tulip from the company, due to her antics causing Cornerstore to suffer losses. Despite wanting his promotion very badly, Junior cannot find the heart to fire Tulip due to her kindness and hard work, therefore distracting her into believing that she is being transferred to the mail room as a kind of promotion, and ordering her to never leave it, to which she hesitantly obeys.

Meanwhile on Earth, a young boy named Nate Gardner feels lonely because his parents, Henry and Sarah, are too busy to spend time with him, and yearns for a younger brother. When his parents scoff at the idea, and he learns from an old brochure about Cornerstore and their former baby-making reputation, he writes a letter asking for a baby brother and sends it to Cornerstore. The letter makes its way to Tulip, who got so bored of waiting, disobeys Junior's orders and puts the letter in a slot just outside the room, which is revealed to be the shut down baby factory (as she was supposed to put it in a containment of letters right next to her). Junior tries to intervene and stop the machine, but dislocates his wing in the process, and to their surprise, a baby girl is created inside a metal container, whom they later name Diamond Destiny.

Knowing that Hunter will cease his future position of becoming boss for creating an unauthorized infant and for not firing Tulip as he was supposed to do, Junior agrees to secretly help deliver Diamond Destiny. As Junior's wing is broken, they use Tulip's flying machine for transportation. When Tulip taunts Junior why he wants to become boss, he sees red, making Tulip become concerned for the safety of Diamond Destiny, and they crash into a frozen tundra. After a brief argument, Junior takes Diamond Destiny in the hopes of getting back to Cornerstore but is ambushed by two wolf leaders named Alpha and Beta and their pack and taken to their cave, where Tulip was also captured. The two manage to save Diamond Destiny, whom the wolves have fallen in love with, and escape.

Back at Cornerstore, an employee named Pigeon Toady learns of Diamond Destiny's existence. He goes after Junior and Tulip to get Diamond Destiny, in the hope that Hunter will fire Junior and he will get the promotion instead. Upon reporting back to Hunter, Toady and Hunter scramble the coordinates Junior and Tulip have been following to mislead them to a different location. After another brief encounter with the wolves, Junior and Tulip run into Jasper, a old stork that was ultimately responsible for Tulip being orphaned and the shut down of baby delivery after he broke her address beacon and wanted to keep her to himself. Jasper reveals that he had searched all of Tulip's lifetime attempting to fix the beacon that would show Tulip's home and that he needed the final piece which Tulip had on her the whole time. At this point, Junior reveals that he was supposed to fire Tulip, leaving her in tears. But, now knowing where her family is, Jasper decides to take her to be reunited with them while Junior sadly continues to deliver Diamond Destiny by himself.

Junior is captured and tied up by Hunter and his cronies at the false location and they kidnap Diamond Destiny. Tulip comes to rescue Junior without having met her family and the two resend themselves back to Cornerstore. After fighting an army of penguins, Junior and Tulip are chased into the abandoned baby making room and start up the machine as a distraction. As thousands of babies are being made, Hunter angrily comes at Junior and Tulip with a large body armor, but with the playful help of Diamond Destiny, Junior and Tulip cause the Cornerstore package factory to fall, taking Hunter with it and seemingly killing him.

Junior rallies the storks, as well as the other birds, to help deliver the babies to the families who wanted them including the Gardners, and upon delivering Diamond Destiny, Junior sees through a vision of what the infant will become to be: a woman that will love her family, take ninja class, and get married. At first, Nate is disappointed that he didn't receive a brother, but when he goes to feed Diamond Destiny, she flings the bottle across the street, therefore changing Nate's mind. The storks and former employees of Cornerstore reunite Tulip with her family, and she and Junior continue their job of delivering babies as co-bosses of Stork Mountain. In the end, every family now knows that storks deliver babies once again.

Tulip causing trouble, danger, Diamond Destiny in danger, arguing with Tulip, having to fire Tulip, wolves (formerly), being held captive, separating from Diamond Destiny, failure, the penguins, glass, being fired, Hunter and his evil plots, feeling sad, hurting the feelings of others, feeling hurt himself 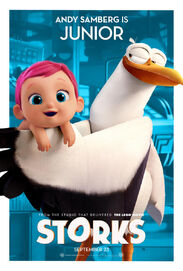 Junior with Diamond Destiny in his poster 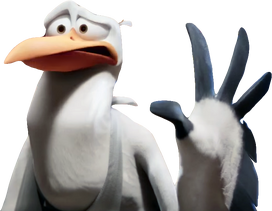 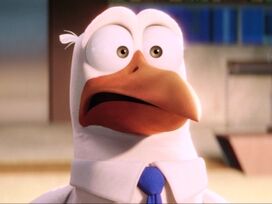 Junior surprised that Hunter is promoting him as boss 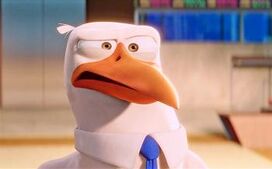 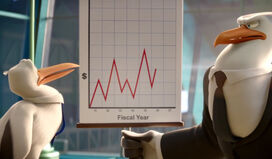 Junior celebrating his one millionth delivery 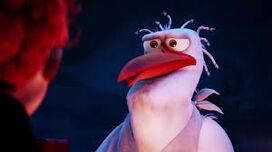 Junior reassuring Tulip she will find her family 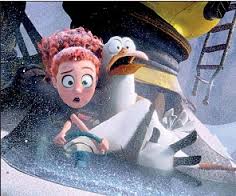 Junior and Tulip having trouble feeding the baby 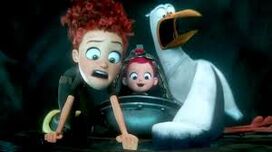 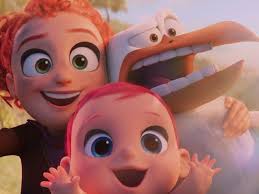 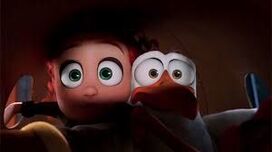 Junior and Tulip in the spherical box mascot costume 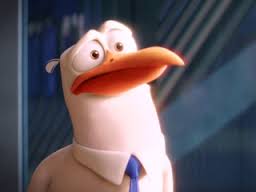 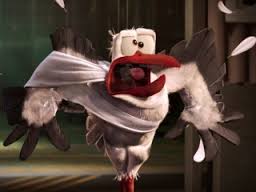 Junior runs smack into a sheet of glass 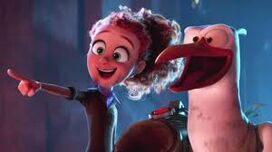 Junior and Tulip laugh at the wolves 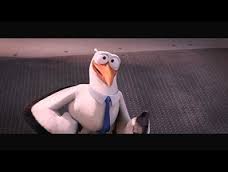 Junior talking to Tulip for the first time 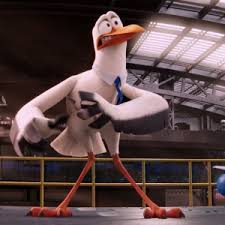 Junior panicking about the flightless birds flying their jet packs 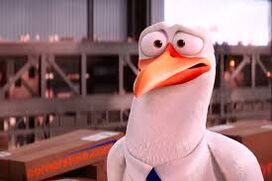 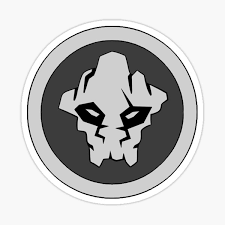 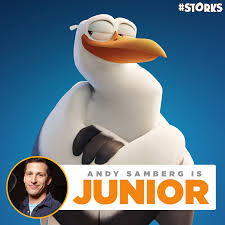 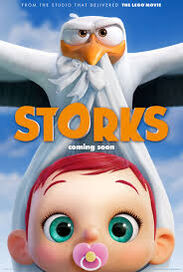 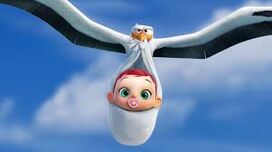 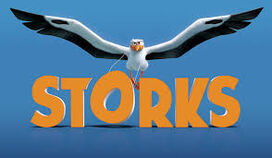 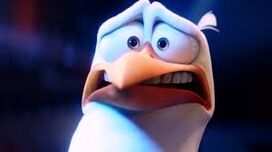 Junior shocked that Tulip has reactivated the baby-manufacturing machine 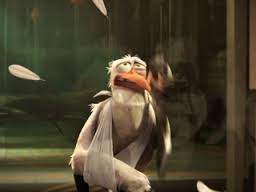 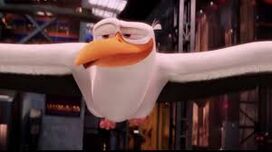 Junior proud of his one millionth delivery

Junior's feathers being braided by Tulip 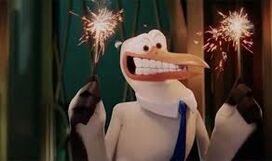 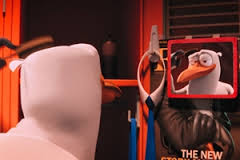 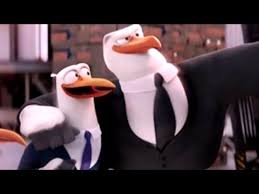 Junior and Tulip shocked that the wolves formed their own bridge 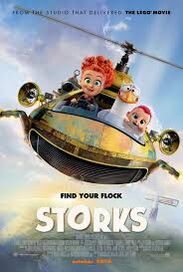