Jupiter is one of the six Greatwyrms featured in Dragalia Lost.

He was voiced by Minami Takayama in the Japanese version, and by Sabrina Pitre in the English version. His humanoid form is voiced by Elizabeth Weinstein.

In his normal form, he is a yellow dragon that resembles a bird with black horn and scales with a yellow to black gradience.

In his high form, he has a stronger resemblance to a phoenix with a white, yellow, and purple coloring.

He is a dragon capable of using electricity as a means of attack.

Prince Euden heads to Domlith Mountains to make a pact with Jupiter. Hot on his tail is Emile who was trying to stop the pact. 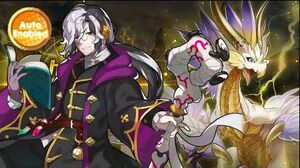