Justice Society is the original superhero team in the DC Universe from the Golden Age of Comics and Earth-2.

The Justice Society of America first appeared in All Star Comics #3 (Winter 1940–1941) written by Gardner Fox and edited by Sheldon Mayer during the Golden Age of Comic Books. The team initially included: Doctor Fate, Hourman, The Spectre, the Sandman, the Atom, the Flash, Green Lantern, and Hawkman. The team had a roster that changed from time to time, with characters leaving the team and others replacing them, until finally the lineup stabilized for the last two years of the book's run. The comic was canceled with issue #57 (February-March, 1951) at the end of The Golden Age of Comic Books, with All-Star Western continuing the numbering.

The JSA, therefore, basically became a team of veterans and mentors for other heroes, as well as the starting point for many heroes in training. This gave the team excellent dynamics: young vs. old, cynical vs. idealist, etc. While its heroes were not as popular as those who form the Justice League, they were respected and admired by all proper heroes in The DCU as pioneers of the principles they stood for. After adding Loads and Loads of Characters in the form of other Legacy Heroes, Johns finalized his decade-long run on the book.

In the New 52, many of the major Golden Age characters were rebooted and re-imagined, with most once again operating on Earth-2, as they did pre-Crisis (in Earth 2), and some operating on Earth-0, the DCU's current main Earth. However, there was no official team operating under the JSA title until Geoff Johns' DC Universe: Rebirthrevealed there had once been a Justice Society on Earth-0, a covert team of mystery men who helped win World War II, but they'd been forgotten by history, lost to time, and needed to be brought back. The team appeared in Scott Snyder's Justice League, where Barry Allen and John Stewart encountered them in the past, with the various JSA members young and in their prime; Snyder's story in Wonder Woman #750 indicated that in this timeline, the Golden Age began when Wonder Woman made her first public appearance by saving President Roosevelt from an assassination attempt (pre-Crisis, it had begun with Superman's first appearance). The team proper — seemingly the post-Crisis version — fully returned in Geoff Johns' Doomsday Clock, which acted as the conclusion to the Rebirthsaga. 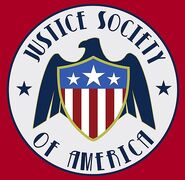 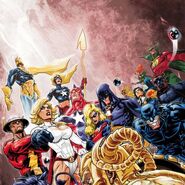 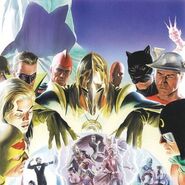 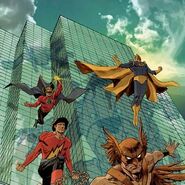 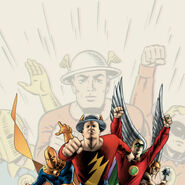 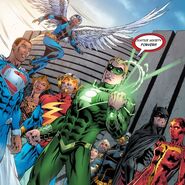 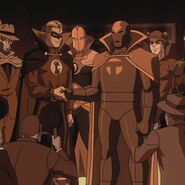