Justy (by Jessica and Bryce)
Jacket (by Dee)

To protect himself from his abusive step father Seth (Succeeded)

Justin is a part of Hannah Baker’s Baker's Dozen and the subject of Hannah Baker’s first and ninth tapes from her list of reasons why she commits suicide. Justin and Hannah dated in the beginning of the school year until Justin began spreading false rumors of him and Hannah hooking up on their first date when in actuality they only kissed a couple times. His second tape revealed that he allowed Bryce Walker to rape Jessica the night of Jessica’s party and did nothing to stop him.

He is portrayed by Brandon Flynn.

Justin first met Hannah at her party, during this time he was still dating her friend Kat. The two begin a relationship after Kat moves away, culminating in Hannah's first kiss. Justin eventually spreads lies and begins the downfall of Hannah's reputation and school life. They met at the playground, or the rocket as Hannah calls him. He took pictures as Hannah slid down the rocket, aware of the fact that she is wearing a skirt. They made out at the bottom of the rocket, with Justin taking racy pictures of her.

The next day, Justin showed his friends the pictures, but then Bryce forwards the picture to the entire school. This caused rumors to go around about Hannah.

Hannah talked about the party where she and Clay shared their kiss. Justin and Jessica (although neither is named) entered the room to have sex, however, Justin gives up because Jessica was too drunk and said she didn't want to have sex. Hannah was forced to hide in the closet when there was no way for her to leave the bedroom. Outside the bedroom, Bryce persuaded Justin to let him into Jess's room. Bryce entered the room and began raping a sleepy and drunk Jessica. Justin opened the door and tried to pull Bryce off of Jessica, but Bryce threw him out of the room. Hannah stated that she carried just as much blame as Justin did, as she couldn't stop Jessica's rape but because she was too paralyzed and scared to move.

Clay and Tony find Justin living on the streets. They bring him home to Clay's house where Clay and Sheri help him detox. They've brought him back so that he can testify in court. He only came with them because they lied and said that Jessica wanted him to come back.

Justin goes to school to see Jessica and learns that she wants nothing to do with him. When someone breaks into the Jensen's home, they take the gun Justin had been hiding in his duffle bag.

Justin returns to school on the day that Hannah's tapes have been leaked to the public. He buys drugs from one of the students in class and later gets high in Clay's room. Alex finds him and manages to turn him on his side before he chokes on his own throw-up. Later, Justin overhears Clay's parents fighting over him so he heads back to his mom's house.

Justin steals money from them again so that he can run away and leave this town. He misses the bus and while waiting for another one to come along, he gets a bunch of text messages from Clay telling him that he needs him because he found the Clubhouse.

They approach Sheri with their plan to get into the Clubhouse by using bolt cutters to cut the lock on the door. She suggests instead that she go in and report back to them.

During Hannah Baker’s wake Justin arrived and was happily greeted upon by everyone. When Clay and Justin have a moment alone to talk, Clay reveals that because of the issues he will face with not finishing high school, becoming a ward of the state and both his parents being no shows, Clay reveals that his parents have offered to adopt Justin as they now see him as one of the family. Despite Clay being initially reluctant he understands that Justin needs a real family to which a speechless and emotional Justin accepts.

Justin was described by Kat as a sweet and idiot boy who enjoyed goofing off with his friends and still had a good heart, but as the story progresses he shows himself as anything but kindhearted. Possibly due to the years of abuse he had been subjected to and the influence Bryce Walker had over him, Justin became a selfish, arrogant, and cruel bully who manipulates everyone around him for his own amusement and personal gain.

Justin is also quite irrational and short tempered and can best be described as a coward for his actions towards everyone. While he did genuinely fall in love with Jessica Davis, he still willingly let Bryce Walker into her room, knowing full well what Bryce would do to her, showing that while he is nice to the people close to him, the only person he truly cares for is himself and no one else. However his selfish nature came to an end when he realized he had gone too far, showing a remorseful side to himself for the first time in the series.

While he did change his mind about Bryce he was already too late to stop him as Bryce physically overpowered him and locked the door so Justin could not interrupt him again. While Justin could have done more by simply asking for help he simply walked downstairs ashamed and feeling powerless. His reason for hiding the truth from Jessica may have been because he had not cared for someone the way he cared for Jessica before and did not know how to help Jessica the right way. 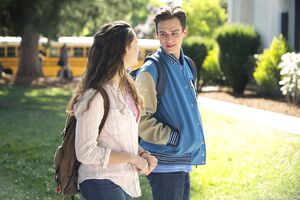 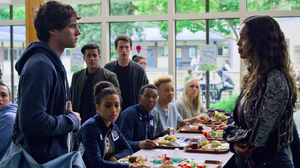 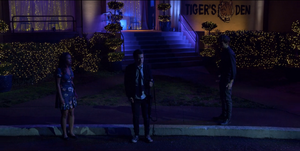 Justin in the finale of Season 2. 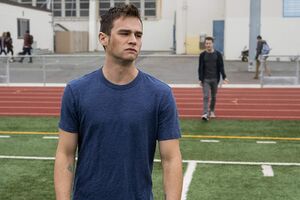 Justin in season 3.
Add a photo to this gallery

Retrieved from "https://hero.fandom.com/wiki/Justin_Foley?oldid=1890656"
Community content is available under CC-BY-SA unless otherwise noted.