No information
Justin Law is one of supporting characters of Soul Eater.

He is voiced by Yoshinori Fujita in the Japanese Version and Eric Vale in the English Version.

He dresses in the garb of a Catholic priest, and worships Shinigami as his god. He constantly listens to blaring music through earphones, which blocks his hearing, though he is capable of understanding others through lip reading.

He takes the form of a guillotine, and is capable of fighting without a meister partner by transforming his arms and parts of his lower body into blades and the frame of his weapon form, and increasing his own soul wavelength through prayer.

Exclusively in the manga storyline, Justin is found to have been driven insane by Asura's madness wavelength, causing him to replace Shinigami with the kishin as his god. He defects from DWMA after murdering Joe Buttataki and framing Stein for it, and briefly joins forces with Noah until he finds Asura on the moon. He battles twice with his former friend Tezca Tlipoca, who burns and deforms the left half of his face in their second battle. He participates in the battle between DWMA and Asura as one of the kishin's minions, and is later killed by Stein and Marie. 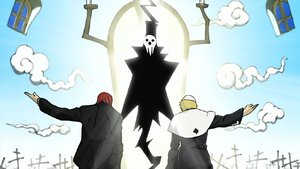 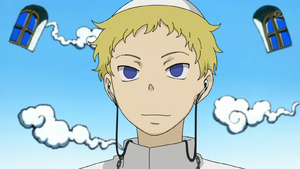 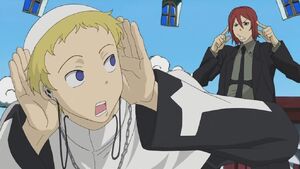 Retrieved from "https://hero.fandom.com/wiki/Justin_Law?oldid=2133809"
Community content is available under CC-BY-SA unless otherwise noted.