Flirting over Gray, Thinking about Gray

Juvia Lockser is a supporting protagonist in the anime/manga series Fairy Tail. She is a member of the Fairy Tail guild and a former member of Phantom Lord, where she was a member of the Element 4. Since joining Fairy Tail, Juvia has developed a crush on Gray Fullbuster and, because of a misunderstanding, sees Lucy as her beloved rival. After being defeated by Gray, she was beaten by the depression she had afflicted since she was young, causing the rain over her to finally clear, allowing her to see the sky for the first time, which she described as beautiful.

Juvia is a slender, young girl with light blue hair, dark blue eyes, pale skin and a curvaceous figure, possessing spectacularly large breasts, ample thighs, and plentiful buttocks. Juvia is first introduced with long hair, tightly curled at the base, wearing a navy blue coat, a fur shawl with a teru teru bōzu attached to it, as well as a Russian Cossack hat. Upon becoming a member of Fairy Tail, she cut her long hair and began to wear more revealing clothing, such as a skin tight robe that reveals a juicy portion of her thighs and buttocks.. However, after hearing about Gray Surge's crush on her Edolas counterpart, Juvia reverts to her original appearance, with the exception of the teru teru bōzu, instead wearing a Fairy Tail emblem. Juvia's Fairy Tail Guild Stamp is above her left thigh, being blue in colour.

Around the time of the Grand Magic Games, Juvia starts wearing a knee-high dark dress coat which is adorned with four, symmetrically placed, light-coloured buttons on the chest. The coat is garnished with fur trimmings around her sleeve cuffs and neck. Juvia wears a matching, dark, Russian-style hat, stylized with a light-coloured butterfly clip, which, in itself, is attached to the fur trimming garnishing her hat. Juvia completes her outfit by fastening a light brown belt around her waist and wearing complimenting, dark brown, thigh-high boots. She also no longer curls her hair, instead letting it fall in thick waves past her shoulders.

Juvia is first introduced portraying an emotionless face, seeming more secluded from everyone, including members of the Phantom Lord Guild. After she joins Fairy Tail, she develops a happier demeanor. She is obsessed with Gray Fullbuster to the point of considering anyone who shows affection towards him a rival. And when Meredy threatened him, Juvia loses her calm demeanor and entered a somewhat satanic-appearing state that frightens Meredy and even Erza. Juvia also seems to have a slight masochistic side; upon making a mistake, she asks Gray to spank her as punishment, saying it's her "hobby". She's also very polite towards other, typically addressing others with honorifics, though she addresses Gray as "Gray-sama" only.

She cares deeply for Fairy Tail and its members. During the Battle of Fairy Tail arc, Juvia is pitted against a fellow guild mate, but instead chooses to sacrifice herself by attacking a thunder Lacrima, even though she knows that it will cause her harm. Upon entering Fairy Tail, she wasn't feared or hated for her past relationship with Phantom Lord, and she maintains a good relationship with the other members. She is also shy about her body, as she doesn't like to shower with other girls. Juvia tends to refer to herself in third person, and often says "drip, drip, drop" due to the rain she used to constantly bring everywhere with her. Juvia has a wild imagination in which she tends to fabricate relationships and love rivals.

Juvia was born in the year X767, and spent her childhood shunned by the other children for constantly making it rain around her. She took up making teru teru bozu dolls in an attempt to make it stop raining, but it only served to make the other children tease her even more.

Sometime during this period, she went off to visit her maternal uncle with a present in hand in the Western Region of Fiore. However Juvia is among the victims of a time stopping thief, including Jude Heartfilia and Gray. However, Gray is ultimately able to stop the nameless thief and her package is returned. Feeling overjoyed, the clouds above her clear up momentarily.

At some point of her childhood, her parents died.

As she became a teenager she would overhear other people commenting on the gloominess of the rain around her, making her feel increasingly depressed. At one point in her life she was in a relationship with Bora, but he broke up with her because he couldn't stand the rain. Eventually, she was accepted into the Phantom Lord Guild, noting that it was the first time anyone had accepted her, and formed a quarter of the guild's elite Mage team: Element 4.

Water (水流(ウ ォ ー タ ー) Wōtā): Juvia is an extremely skilled user of Water, which allows her to produce, control, and manipulate water. She can use the water in a variety of different ways, such as producing blades of water that can even slice through solid rock and metal (and potentially even use this technique to kill even if she has never been shown), creating boiling beams forming waves of tremendous destructive power and force to damage her opponents, or even trapping opponents in mini-prisons made of her water. Juvia also has the ability to turn into water, seemingly without thought, thus allowing both physical and magical attacks to pass through her without harming her.

Water-Make (水造形 Wōtā Meiku): a form of Molding Magic that lets Juvia create, or at the very least manipulate existing water. The scope of usage is not limited to just pure water, but also to things that contain it in large quantities, such as blood.

Unison Raid (合体魔法(ユニゾンレイド) Yunizon Reido): Juvia possesses the ability to perform a Unison Raid, which allows two Mages to fuse their Magic together. She performed it with Lucy after the latter summoned Aquarius, allowing them to perform a powerful charging attack. She has also performed it with Gray in the anime adaptation, causing pillars of water to rise into the air (on the whole scale of a city like Magnolia), which freeze and send needles of ice raining down on their opponents.

Conjuring Rain: Ever since her younger years, Juvia has had the ability to conjure rain, although she has no control over it, the rain appearing to merely be dictated by her emotional state and, depending on it, is able to cover a small area (like the battlefield in which she fought Gray) until to an entire city or island (like Tenroujima).

Breathing Underwater: Juvia has the ability to breathe underwater, as seen during the infiltration of the Tower of Heaven with Natsu, Gray and Lucy.

Enhanced Speed: Juvia, especially when using her water body, is able to move at an incredible speed that can barely be followed with the human eye.

Enhanced Agility: Juvia has proved to be able to perform superhuman jumps. As well as to dodge many of the attacks Keyes converged against her. When fully utilizing its water body, it is also possible to climb, if necessary, through several projections, many kilometers of height.

Expert Hand-to-Hand Combatant: Even if she is not physically strong and able to body-to-body combat like most of her guild companions, Juvia is able to use her body of water to greatly improve all of her physical performance. During the fight against Gray and that with Lucy, she used her body against both in various ways (for example, suck them inside of her to drag and / or turn her arms into a whip of water). During the fight with Meredy, the latter barely managed to confront her, and was seriously injured when a remarkably powerful Juvia's water punch made her crush over the rock.

Keen Intellect: Through the Tower of Heaven Arc., Juvia has shown remarkable intelligence over the average, suggesting Team Natsu to infiltrate the tower by exploiting underwater galleries. She also showed some magic knowledge of Simon Mikazuchi's Darkness Magic and revealed that she had followed Team Natsu in their rescue mission because she had realized that Simon had spared her and Gray consciously and wanted to understand his intentions. Finally, when confronted with Keyes during the war against Tartaros, she once again proved to be a rather pragmatic fighter, allowing him to voluntarily absorb her in the water form, leaving him to believe he has won and then destroys him from within.

Immense Magic Power: As a former S-Class Mage and one of Phantom Lord's Element Four, Juvia possesses a great quantity of Magic Power, on par with an S-Class level Mage of Natsu, Gray and Gajeel's caliber. Her level of magic energy easily makes her one of the eight to participate in the S-Class Trials. Her power is amplified when she channels her emotions (for example, anger or sadness) into a flow of pure magical strength that enables her to overwhelm easily even the strongest opponents like Meredy, with Erza stating that is "her true power". Her Magic Power is blue marine when exerted. 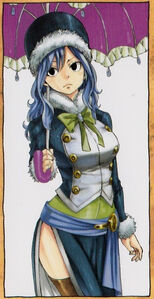 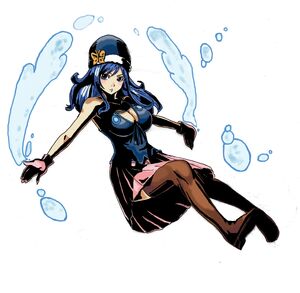 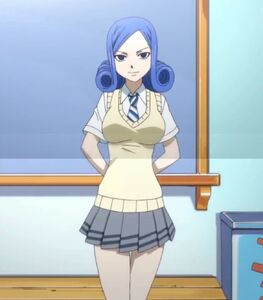 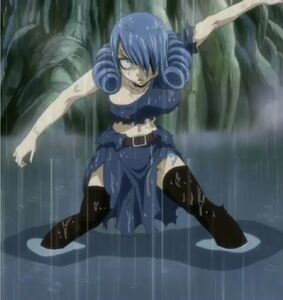 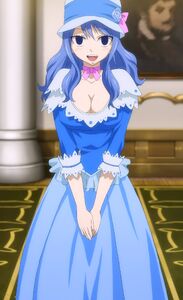 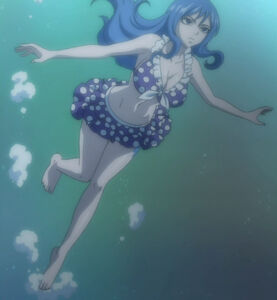 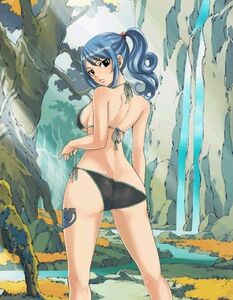 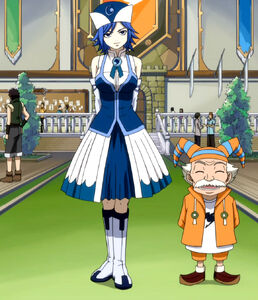 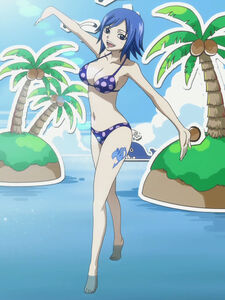 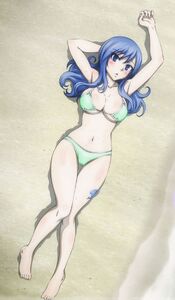 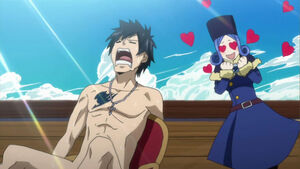 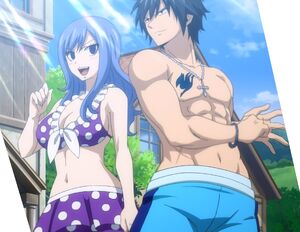 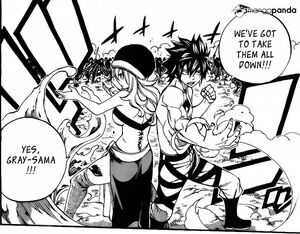 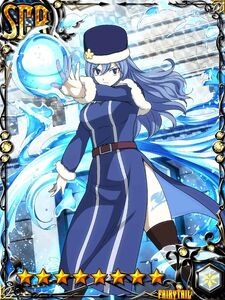 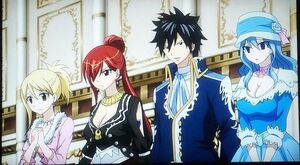 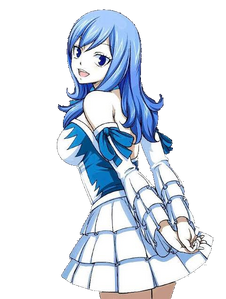 Retrieved from "https://hero.fandom.com/wiki/Juvia_Lockser?oldid=1693968"
Community content is available under CC-BY-SA unless otherwise noted.