Start a Wiki
Juza is a member of the Nanto Goshasei (南斗五車星, "Five Chariot Stars of the South Dipper") and represents the wandering spirit of the Clouds. He has mastered a self-styled martial art (我流の拳, Garyū no Ken) and was considered the most gifted of the Goshasei.

Juza was Yuria's childhood sweetheart and wished to marry her, but his dreams were shattered when he discovered she was his half-sister from the same father. As a result, Juza descended into a carefree and promiscuous lifestyle to bury the pain. The Goshasei believed Juza was the only one capable of stopping Raoh, but Juza, being a free-spirited man, did not wish to fight for the sake of the Last Nanto General. When he discovered it was none other than his beloved Yuria, Juza swore his life to her and rode into battle against Raoh. Juza had known Raoh since childhood and was always the perfect foil to Raoh's serious nature. Ryuken once remarked that the two of them were equals.

Juza was famously the first and only man to steal Kokuoh-Go from Raoh. Because of this humiliation, Raoh refused to move until his mighty steed returned to him. When Juza returned for a rematch, he suffered the true extent of Raoh's strength and was defeated. However, he endured Raoh's torture to the bitter end and refused to identify the Last Nanto General. Raoh described Juza's death as 'terrifying' and ordered his men to prepare an honorable burial for his fallen rival. However, it was this same tenacity that revealed the Last Nanto General's identity to Raoh, as he knew that Juza would only sacrifice his life for Yuria. 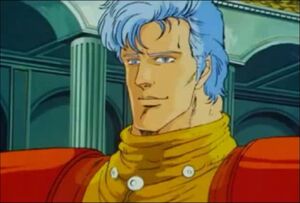 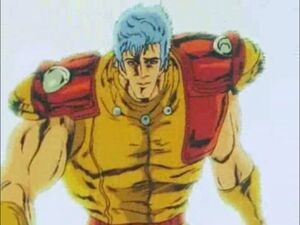 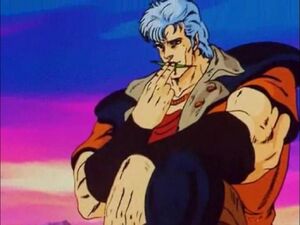 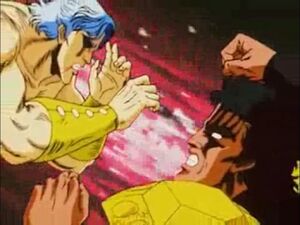 Juza facing Raoh
Add a photo to this gallery
Retrieved from "https://hero.fandom.com/wiki/Juza?oldid=1857728"
Community content is available under CC-BY-SA unless otherwise noted.