Heroes Wiki
Register
Don't have an account?
Sign In
Advertisement
in: The King of Fighters Heroes, Male, Pragmatists,
and 57 more

K Prime
He who surpasses K

Eliminate Krizalid, Zero and Igniz.
Save the world from evil threats.
Protect his sister Whip/Seirah and friends.

K' (real name unknown) was a normal child who lived happily with his sister, Seirah. One day, they were captured by NESTS, a crime syndicate who dealt with drugs, genetics, robotics and biotechnology. K' was kept under NESTS and trained to be some kind of weapon. In 1998, K' was made to participate in the Kusanagi cloning program. He was infused with Kyo Kusanagi's DNA, which gave him the power of pyrokinesis. During the program, K's memory was tinkered with, and he was made to believe that he was Krizalid's clone. Any real memories from his past has either been erased by NESTS, forgotten, or repressed.

Under NESTS orders, he and Maxima joined the King of Fighters tournament with Benimaru Nikaido and Shingo Yabuki. The team makes it to the finals and are sent to a place where Krizalid waits for them. He poses as the tournament's host and fights them to gather their battle data energy. He hoped to use the data to activate the thousands of listless Kyo clones around the globe. However, K' defeats him and the team learns that Krizalid was merely a pawn for NESTS. Shortly afterward, Krizalid is executed by his superior. When the base collapses, K' and Maxima are divided from their team and hunted down by the Ikari squad. They survive the ambush and continue their resistance by leaving the organization. K's personal reason for doing so is find a way to regain his lost memories.

The next year, K' and Maxima were joined by mercenaries Vanessa and Ramón. They entered the tournament to discover NESTS's scheme, but Vanessa and Ramon were there to capture K' and Maxima at the end of the tournament, since they were working for Ling and Heidern. Their team makes it to the finals where they encounter Zero. Although K' defeats the traitor, they are unable to stop the Zero Cannon from firing. Unknown to them, Kula Diamond and her team destroy it and save the world from further damage. K' and Maxima are once again separated from their teammates after the tournament's climax. Whip finds them, reveals her relation to K', and joins their resistance effort.

They spend the remainder of the year hunting down NESTS's bases around the globe. Though they have stumped some of the syndicate's plans, none of the bases were the main headquarters they were hoping for. K' and company enter the 2001 tournament with Lin, who tracked their movements in his personal hunt for Ron. Once his team makes it to the finals, they are lifted into a spaceship and are confronted by the real Zero. He reveals to the frustrated K' that they are on their way to the syndicate's main headquarters and will meet the real leader to NESTS. Once they reach the satellite, they meet Nests, Misty, and Igniz. Although Nests requests their neutral cooperation, he is quickly killed by Igniz. There, they learn that they are merely cyborgs (or clones) purely created for Igniz's personal entertainment (i.e. to become a new god). K's team faces the villain and defeats him, which motivates Igniz to kamikaze the satellite to Earth. It harmlessly falls in the ocean - apparently thanks to Ron - with most of its passengers safe. Emerging from the wreck, K' forms an alliance with Kula and Diana. Both of them want to make their own future and make up for the time lost in their lives.

In 2003, Chin Gentsai visits K' and Maxima and requests that they enter the tournament. Chin, feeling a dark wave of energy around KOF that year, wants them to investigate it in his place. K' and company make it to the finals and face Mukai. K' defeats him, but is bothered by his taunts about regaining his memories, as well as reaching his true potential. Mukai's words continue to haunt him in the following tournament, leading K' to wonder if he can surpass his fate as "the second Kusanagi flame". At the end of the XI tournament, K' and his teammates were invited by Heidern to attend a lecture about the mysterious group known as Those from the Past. Heidern said he had Magaki's body, but they were attacked by two children who took the body away. K' had absolutely no interest in entering the KOF XIII tournament, and is upset when Chin calls him once more at his apartment with Maxima. Since he soon learns from Chin and Kula that they're in the newest tournament, K' is forced to enter against his own will.

K' has a very serious personality but is very easy to enrage due to his more high-strung side. He is starting to treat Whip as a big sister and Kula as a little sister. He often calls Maxima names - like "stupid", "idiot", etc. - but he actually trusts his partner's reliability. He is hardly polite and is always gruff, even to those close to him. Because K' usually expresses his concerns in a "tough guy" manner, Maxima jokingly calls him dishonest or stiff. He sees Kyo as a rival and wants to prove he is better than him, not as only a clone.

In KOF XIII, several fighters often point out K's rather immature personality ("whiny", lazy, unsocial and constantly rude to others) in their pre-fight dialogues against him. It is also pointed out he feels trapped in his life and is also rather very lazy and hates involving himself in most things he finds trivial, making him not unlike Iori Yagami in terms of nihilistic mindset (and the two ironically very much hate each other and are prone to nasty dialogue between one another for little reason).

He, of course, despite his laziness to partake in the KOF tournaments, at times often boasts about his abilities to take on anyone anytime, anywhere, which is something not quite far off from his capabilities as he also finds engaging in tasks with expected results to be yet another chore. This was pointed out in KOF XIV, particularly by Hein, who calls K' a "carnivore" because of this.

Overall, K' is anti-social, mainly showing traits of arrogant, and being rebellious and self-centered. 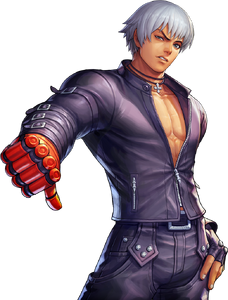 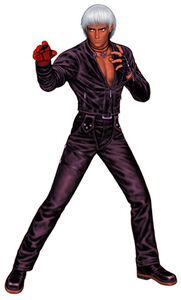 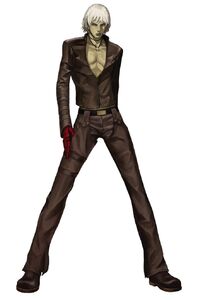 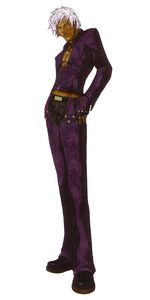 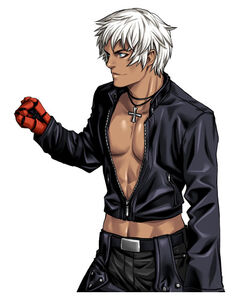 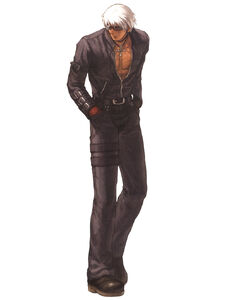 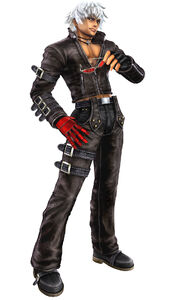 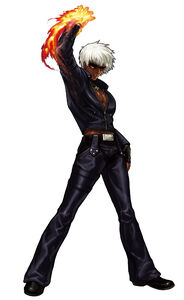 The King of Fighters XIII.

The King of Fighters XIV. 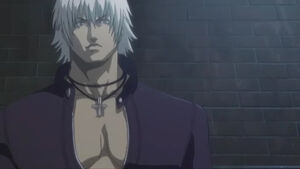 K' in The King of Fighters: Another Day.