To become a true hero

Radicles
Enid
Mr. Gar
Dendy
T.K.O.
Much of everyone else in the plaza

K.O. (sometimes just written as KO) is the main protagonist in the OK K.O.! Let's Be Heroes series. He fights those of Boxmore, along with Radicles and Enid. His employer is Mr. Gar, the owner of Lakewood Plaza Turbo.

K.O. is a small boy who has tan skin and black eyes. He has dark brown jagged hair that is somewhat in the shape of a square at the top and is held together with a red sash band. K.O. wears a low-cut white tank-top with a blue sleeveless jacket, which is his Gar's Bodega's standard uniform, and dark blue shorts. He also wears red wristbands, pink leg warmers and is barefoot.

K.O. has a strong willpower and courage but is very naive. He often shows that he wants nothing more in the world than to help people, as it would help him to get closer to his goal of becoming a true hero and because it feels good. According to Dendy and her data, she believes that K.O's desire to help others comes from a lack of a father figure and wants to gain love from others in order to fill that void despite having a loving and caring mother.

It has been shown that K.O. is sensitive when it comes to the subject of his father since he never knew him well. K.O. has been shown to be a "mama's boy" as he loves and adores his mother, Carol, and sees her as the greatest mom in the world. He still refers to her as his "mommy" from time to time. Despite how good-natured K.O. is, he can still become greedy and arrogant under circumstances where he feels he is in power.

K.O's overall strength and agility, despite only having a 0.1 power level, are impressive for a kid of his age. However, by comparison, he is still weak compared to Rad and Enid, who both have been working for longer than him. K.O, while strong, still has trouble punching through solid metal without the assistance of Dendy.

He is a quite accomplished hand-to-hand fighter, thanks to his training under the tutelage of his mom and his days working and practicing with Enid and Rad. He could face Darrell and Shannon in many occasions (although sometimes with the aid of his friends). In "T.K.O.", he faced and managed to defeat him and lock him back to his cage. In "Let's Have a Stakeout" he could resist and counterattack in his battle against Shadowy Figure, despite the later's superior fighting skills.

KO's Special Move, entitled the Power-Fist Fireball, is similar to that of " " from and "" from . Consists of a powerful energy punch surrounded by blue flames which is delivered from one of his fists. This special move is strong enough to destroy many Jethro's robots, tossing Shannon to a tree in "Rad Likes Robots" and break a steel door in "Let's Have a Stakeout".

One of K.O.'s most influential and notorious characteristics is his charm and optimism that he uses to motivate and cheer up his friends and allies. He can get along well with almost every person he meet.

In the episode "Face Your Fears" it's revealed that K.O.'s fear resist level is 15, overpassing Rad's 10 and Mr. Gar's 8 level respectively, which proves that K.O. has a very brave attitude. In the same episode, he even successfully helped Enid, Rad and Mr. Gar to overcome their greatest fears while they were trapped in the super extra hard level of the video game Face of Fear. 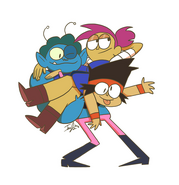 K.O. with his friends,Enid and Radicles
Add a photo to this gallery
Retrieved from "https://hero.fandom.com/wiki/K.O._(OK_K.O.!_Let%27s_Be_Heroes)?oldid=1163888"
Community content is available under CC-BY-SA unless otherwise noted.