To stop the killing game.
To self-destruct himself in order to destroy the Ultimate Academy and allow the last three survivors escape (both succeeded).

K1-B0, preferring to be known as Keebo (Ki-Bo in the original Japanese version), is a student in Ultimate Academy for Gifted Juveniles and a participant of the Killing School Semester featured in Danganronpa V3: Killing Harmony.

He has the title of Ultimate Robot (Super High School Level Robot), owing to his robot body. He is a creation of Professor Idabashi.

K1-B0 was created by an organization that created and featured Killing Games for the entire world's entertainment, Team Danganronpa. They decided that the main gimmick for the 53rd Season of Danganronpa would be "audience participation", and K1-B0 was created for that role. The prominent Ahoge on the top of his head acted as an antenna that received signals. This would end up being the "inner voice" that K1-B0 would hear many times throughout the events of the Killing Game, nothing more than an audience survey. His eyes would also act as a camera for the viewers, letting them see the Killing Game from his perspective.

In order for him to fulfill his role as the "connector" to the outside world, K1-B0's memory of being a part of Team Danganronpa was erased and fabricated just like any other Killing Game participant. His memories and personality were fabricated as follows:

Professor Idabashi, the leading expert in robotics engineering, created K1-B0 to be the culmination of all his research and work. He was meant to be a robot more human than any other robot before. Initially, K1-B0 had no knowledge nor awareness, and was only capable of displaying a very narrow spectrum of human emotions. The plan was to raise and develop him like a parent would their own child. However, a few years passed, and there was no improvement in his mental state.

One day, an unpredictable accident occurred during a routine experiment. K1-B0's programming went rogue and he ended up seriously maiming the professor, but fortunately he survived. After hurting the professor, K1-B0 was suddenly overcome by immense sadness, especially considering that the First Law of Robotics stated 'a robot must not harm a human being'. Even though K1-B0 wasn't punished for breaking that rule, he nevertheless felt sadness and blamed himself, feeling extremely guilty. For the first time, he understood how it felt to feel human emotions, and at that moment his AI suddenly reset as if committing suicide. He became similar to a newborn infant once again, with all of his memories deleted. In his "next life", K1-B0 called it the day of his own "death" and the day of his true "birth". After learning the story from the professor, he assumed that perhaps he had wanted to be "reborn" as the professor's son once again.

K1-B0's strength was considerably weakened after the incident, described as being similar in strength to an average senior citizen. This time, his AI matured accordingly and he learned and developed as his creator raised him like his own child, with K1-B0 considering the professor his father. Eventually, the professor even sent him to attend Īdabashi Industries High School (飯田橋工業高校) and he was recognized as being Ultimate even as a robot. However, he fears that other students will discriminate him because he is a robot.

At the end of the game, K1-B0 self-destructs in order to destroy the dome around Ultimate Academy for Gifted Juveniles, allowing the survivors of the Killing School Semester, Shuichi Saihara, Maki Harukawa and Himiko Yumeno, to escape into the world outside the school.

K1-B0 is a robot, therefore having a fully mechanical body structurally engineered to, in shape, resemble a human being. His body is mostly made up of metallic, armored plating, not wearing actual clothing, but resembling a gakuran, a school uniform worn by male high school students. He has four glowing buttons that run from his chest to his stomach down the middle of his torso, a metallic left breast pocket, and something that resembles a belt around his waist, two red buttons attached.

As a robot, K1-B0 is considered sexless and lacks the means to have reproductive functions, but still appears masculine via physically and the voice of a teenaged boy. His face has very pale skin. His eyebrows press closely to his round, mechanical blue eyes, making it appear that his brows are a part of his eyes. Thick black lines run from around his eyes and down his cheeks to reach his chin. He can make his eyes glow a bright yellow or blue and emit light. He has a tongue, but it doesn't seem to have any other purpose than speaking, as he cannot actually eat food. He has white hair that is very sharp and swayed to the left, along with the very large ahoge on the top of his head.

K1-B0 possesses a very tall, round and metallic collar around his neck, his previous school's emblem on the left side of his collar. A thin strip of screen wraps all the way around it, displaying a constantly changing string of green text. A softer black material covers his neck entirely, but he is capable of moving it up to cover the lower half of his face to resemble a face mask. The collar is usually open in the middle, but is able to clip the two metallic parts together to protect the area of his neck entirely. He doesn't seem to have actual ears, but black, headphone shaped objects in the area around them. He can use his ears to take recordings and play them out loud.

Later, it is revealed that K1-B0's ahoge is an antenna that receives information from Team Danganronpa, which will take the form of an "inner voice" and persuade him to take certain actions, said actions being decided through viewers' surveys.

In the prologue, he wears the uniform of his original high school, including a student hat. It's a plain, black gakuran with white buttons buttoned down the middle and on his cuffs, and he wears black gloves. His uniform is a bit too small for him, his jacket described as "bulging as if it's about to burst" due to the robotic body underneath it. Still, he looks more human, lacking some of his more mechanical traits such as the black lines on his face and the black headphone shaped ears on the sides of his head.

K1-B0 is a polite and serious teenage robot, who has some trouble with human social interaction, and often comes across as unintentionally comical as a result. According to Kazutaka Kodaka, K1-B0 has both cute and cool characteristics, with him being socially awkward but serious. Nevertheless, K1-B0 takes pride in his form and often boasts about his wonderfulness and efficient functions, though the other students never seem to find them impressive much to his disappointment. His aim is to overcome being an ordinary robot and because of this, he may get offended if he is compared to much more simple machines. While generally well-mannered, he is quickly angered by any prejudice against robots and sometimes threatens to sue people who make "discriminatory remarks". He considers robots a minority group among humans and can get slightly paranoid about "robophobia", supposedly because of past experiences. However, ironically, he himself is shown acting condescending and perpetrating "robot-on-robot abuse" towards simpler machines such as the robots with Monokuma's likeness, considering them mere stuffed animals who are beneath him.

Since he is a maturing AI, K1-B0 learns and develops similarly to a human, making him an unique existence. While he has no heart nor brain, he uses his calculations to speak "as if he had a heart". Even still, he often can't read the mood around him and is oblivious to things, sometimes taking things very literally and occasionally acting insensitive. Due to being overly serious about certain topics and unable to understand sarcasm, he is an easy target for bullying and it's easy to make him heated up, and he is rather easy to read. According to Izuru Kamukura in the bonus mode Ultimate Talent Development Plan, K1-B0 has a tendency to rely on others in difficult situations, and he overall gets very nervous in bad situations. Furthermore, he feels a bit self-conscious about the fact that he cannot strengthen his body on his own like humans, and he needs help for maintenance and upgrades. Overall, he is a bit conscious about being unable to do some things humans can, causing him to act condescending towards humans at times and proclaim that he can do lots of things humans cannot. In Chapter 4, when the students enter the program world, K1-B0 appears disappointed and secretly wished he would have a human body. In Chapter 5, he is seen wondering his existence and being very interested in whether or not he is considered a person by the hydraulic press' safety function and Miu's Electrohammers, and even wants to test them despite the risk. In one scene, he is scared of the idea of a huge mecha suddenly appearing, not realizing the irony of it. He himself has also pointed out that he doesn't really like "sci-fi" things, even though his existence alone is quite sci-fi, and he would rather be more like other people instead of possessing things like rocket jets. He greatly loves Japanese culture, including Japanese food (though he can only look at it), kimonos and wind chimes. However, he also feels insecure about being too ordinary and not deserving his title as the Ultimate Robot, which is why he has a dream of becoming a pop star or doing some other type of work. For a short time, he even considers becoming a "tragic hero" figure in order to become more interesting, with a new tragic backstory and weapons, even though it's not something he would like. In general, he has a strong desire to be accepted and be like everyone else. 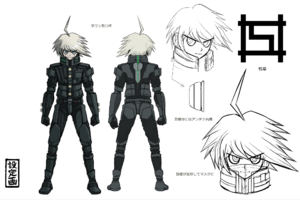 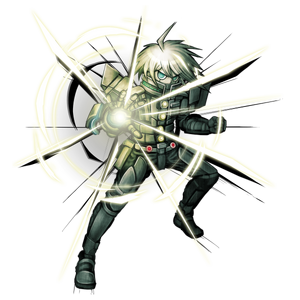 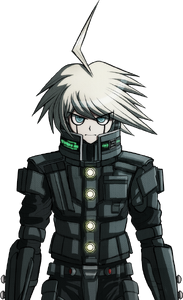 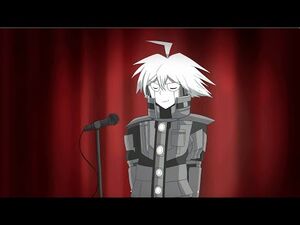