Kaepora Gaebora is a wizened old owl who first appeared in the video game Legend of Zelda Ocarina of Time and is actually the spirit animal form of the Sage of Light, Rauru.

Kaepora Gaebora is the owl incarnation of Rauru, an ancient sage who built the Temple of Time where the Sealed Temple (seen in Skyward Sword) once stood during a period in history know as the Era of Chaos. Since then, He has resided within the Temple of Light located in the Sacred Realm to protect the Triforce from those who desire to steal it.

Rauru, in the form of Kaepora Gaebora, first meets Link on his way out of his home, the Kokiri Forest. Kaepora Gaebora gives Link advice on crossing the wide and potentially dangerous Hyrule Field. Once Link confirms he understands, Kaepora Gaebora will wish Link well and fly off. Kaepora Gaebora is encountered again and again throughout the game, functioning as both a tutorial and exposition for events. This includes explaining ways the world has changed to Link as an adult from it's state when he was a child. There are two occasions when Kaepora Gaebora will actually help Link get around, once at Lake Hylia where he will offer to carry Link back to Hyrule Castle, and once on top of Death Mountain where he will drop Link off in Karkariko Village.

Kaepora Gaebora will briefly meet Link in the game Majora's Mask in the Southern Swamps. Kaepora Gaebora will teach Link the extremely useful Song of Soaring, which allows Link to fly from one owl marker to another instantly. The markers are in Kaepora Gaebora's image and can be activated by slashing at them with a blade, prompting the statues to spread their wings. Activated statues will remain active even if Link goes back in time, thus giving him permanent warp points.

Kaepora Gaebora reappeared to aid Link during his quest to defeat Vaati and save Princess Zelda.

in Super Smash Bros. Ultimate, Kaepora Gaebora appears as a advanced support spirit that prevents fog from forming during a battle. His spirit battle is against Young Link on the battlefield form of Distant Planet, the screen occasionally flips. 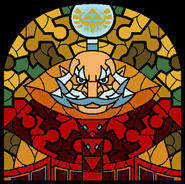 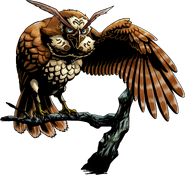 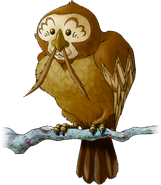