Heroes Wiki
Register
Don't have an account?
Sign In
Advertisement
in: Articles under construction, Female, Anime Heroes,
and 36 more 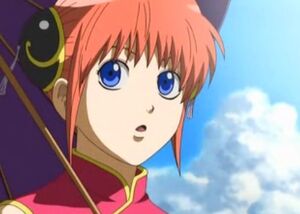 Kagura is a heroine and one of the protagonists of the anime and manga Gintama. She is a young alien girl from the powerful Yato Tribe who are all gifted with superhuman strength and fighting ability.

She was voiced by Rie Kugimiya in the Japanese version, and by Luci Christian, Jocelyne Loewen and Crystal Lopez in the English version.

Seemingly an innocuous, carefree young girl of Chinese descent, Kagura is actually an alien belonging to the Yato Clan, one of the strongest and most bloodthirsty of the Amanto races. Because of her Yato blood, she is extremely strong and an incredibly fierce and capable fighter, able to singlehandedly take down multiple enemies, crush vehicles with her bare hands, and regenerate from wounds sustained in combat. She came to Earth to earn money for her family, and to escape her violent Yato heritage, which she staunchly rejects.

Kagura and Gintoki's relationship is very much a father/daughter one and she is highly protective of him, often affectionately referring to him as Gin-chan. Kagura also has an unusually strong appetite and is often seen devouring mountains of food or complaining that she's hungry. She is often seen with or riding atop of her gigantic pet dog Sadaharu.