Mage of the Mermaid Heel Guild

Kagura is a slim and large-busted young woman, with long black hair that falls to the middle of her back. It is cut in the traditional Japanese "princess style."

Kagura wears an elaborate blazer with gold lining, and a large collar, which is open to reveal a collared shirt and red tie underneath. The cuffs of this jacket are tucked into a pair of white wrist-high gloves. On her legs, Kagura wears a pair of black leggings, which are tucked into a pair of knee-high boots and sit under a short white frilled skirt. Kagura also wears a white headband with a white ribbon tied at the middle in a bow, pointing straight up.

Kagura gives off a very calm and relaxed air. Her expression is almost always blank. She does not show much emotion towards her decided battle against Yukino, even when her guild-mates expressed their concerns. She is also not very talkative. Despite this, however, she still politely returned Yukino's greeting, and upon being asked by Yukino if she would like to make a bet before their fight, she replied that she does not take bets lightly and dislikes casual bets, showing that she has a strong sense of honor and pride. Though appearing certain in her abilities, Kagura does not gloat or boast of them, choosing to give off a hard air of confidence in the face of battle. When faced with the two giant fish Pisces, Kagura did not waver, attacking straight away. When told by her opponent that she was out of luck, Kagura replied that she doesn't rely on such things, as she makes her own choices.

Kagura doesn't feel any joy or pleasure from winning. She does not smile upon her win in battle, rather; she maintains her emotionless face and walks away, only stopping to remind her opponent of the bet they made, showing she is not one to patronize her enemy, nor one to celebrate in the face of victory. She has a leadership spirit.

Kagura harbors a scathing hatred for Jellal Fernandes for having killed her brother, Simon, and wishes to kill him with her own hands. It is for that sole reason that she keeps her sword, Archenemy, sealed. The mere sight of Jellal is enough to make Kagura physically sick, and even something as simple as mentioning his name sends her into a rage. After overhearing Millianna's conversation and discovering what really happened, her hatred for Jellal begins to lessen, although it still seems to trouble her. 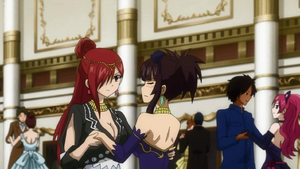 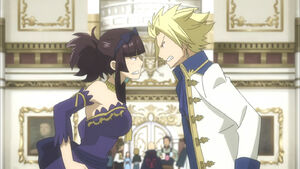 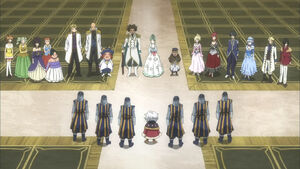 Retrieved from "https://hero.fandom.com/wiki/Kagura_Mikazuchi?oldid=1959561"
Community content is available under CC-BY-SA unless otherwise noted.