Kai is the leader of the Deer Squad.

Kai is super smart, as he is always creating things. He is a good team leader, and tells the Deer Squad what to do during rescues.

Kai has golden-brown fur, with white on his belly and face. He has small floppy ears and brown antlers. Whenever he wears a helmet, his helmet is yellow with his symbol on it, and a see-through visor. It also allows Kai to communicate with the others during rescues. 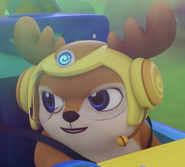