Kai Hiwatari is a character from the manga and anime series Beyblade. He is the captain of the team BBA (Bladebreakers in the English dub) throughout most of the anime series and the keeper of the Phoenix bit-beast Dranzer, or in the original Japanese version, Suzaku, the Phoenix god of the South in Chinese/Japanese legend.

Kai is the son of a noble family and heir to the huge Japanese military company "Hiwatari Enterprise". He is a hard worker who is a cool, serious and rather unsociable person, but is full of ability in beyblading and is one of the greatest bladers to ever play the sport. He is the captain of the Bladebreakers throughout most of the original series and the possessor of the Bit-Beast Dranzer.

He was voiced by Urara Takano in the Japanese version, and by David Reale in the English version.

Kai is a proud and very confident blader who is willing to sacrifice everything to get what he wants, which he usually gets through hard work, sweat or steel-hard determination, though he doesn't seem to mind stepping on some toes on his way up. He is also a quiet and mysterious person. However if he at any time doesn't succeed in what he wants to do, he is very likely to feel down, and stay down for a while, in a depressed state, even willing to give up what he holds so dear, beyblading. However, when the time comes he overcomes his defeat and rises stronger and even more determined than before.

Although rather introverted, Kai is one of the most emotionally driven beybladers in the series and far more emotional when he beyblades, depicting the great importance that beyblading holds over his life. Even as the captain of the Bladebreakers, he always kept a certain distance from his teammates. According to Emily, Kai was afraid to get to know them as he might start to like them which, eventually, happens. He has always acted alone without making friends and appeared to not know the meaning of friendship after being alone and friendless most of his life, only caring for his abusive grandfather who continuously used him. But when Kai was stuck in the ice at Lake Baikal and his teammates, whom he had betrayed and insulted, desperately tried to save him, he was appalled to realize that they liked him and never stopped being his friends, finally shattering the 'invisible wall' he had created as stated by Kenny. As the series progresses, he matures and becomes more open with his teammates and grows more comfortable around them. In the end, despite his differences with many of his peers in the beyblade community, Kai sacrifices a great deal to free the world of the influence of Boris and his BEGA company.

It is revealed that Kai really cares about his teammates. He saved Max from being smashed under a meter thick glass in Beyblade, brought Driger back to Ray during a fight with Dunga, he saved Tyson, Hilary, Ray and Kenny from Team Psykick's headquarters in V-Force, he saved Hilary couple of times on the island in V-Force, he saved his teammates from the cage that was falling due to Sickle Weasel and risked his life to destroy the BEGA league.

His most distinguished trait is his sense of pride and fairness.

Although a tough guy, he is shown to be feeding a cat with milk, bringing food for a family of cats, sitting with a cat in an alley and worrying over the safety of a cat whilst training near it. This indicates he has a soft spot for animals, showing the more human side of his nature than the cool, collected and silent front he usually has.

Kai is a tall and muscular teen, and one of his remarkable features is his hair and eye-color that changes from season to season. However, his appearance of season 1 fits the best with the manga flavor, which is red eyes, light blue-purple bangs, and dark hair. He is probably the blader who changes his outfits the most, though he frequently wears a tight tank-top with baggy pants that is mostly dark in color (black or purple) with colorful details (like yellow buttons and red strings).

He has a scarf and cobalt blue face-paint as a trademark, even though he doesn't wear his scarf in season 2, nor his face-paint while in school. Kai throws his scarf away when doing a special move as it is filled with weights. He has an earring on his left earlobe.

Kai's skin tone is lighter in the anime than in the manga, however, he is still considered pale either way. His arms were covered in scars in season 3, though they appear to have healed.

In season 1, Kai is seen wearing cerulean baggy pants with large pockets, with a black tight-fitting tank-top, with red ends and yellow buttons. His shoes are black with red stripes and resembles skater-shoes. He is wearing his signature scarf, and red arm-guards. His eyes are Carmine/brown and his bangs are Carolina blue, with Egyptian-blue short slick hair.

In season 2, he is wearing gray pants with red stripes above his knees, and a purple tank-top with a turtle neck, replacing his scarf, and with red stripes and yellow buttons. He is wearing purple on his arms as well. His shoes seems to be timberland or military boots. His eyes are blue/gray in this season, and his bangs a dark shade of gray while the back of his hair is almost black. He is also wearing a school uniform, a green blazer, white shirt, a red tie and gray pants. He is seen wearing a black earring and loses his blue triangles temporarily.

In season 3, he's seen wearing purple pants with a purple top, and a black west above with red stripes and yellow buttons. His scarf is back again and he's wearing black gloves and black shoes. His eyes are light purple, and his hair is a darker shade from his previous hair colour in season 2.

In the manga, a lot more is revealed about Kai's past. His father's name is Susumu Hiwatari, and little is seen of his mother.

Kai is even nastier than in his initial anime appearance. It is revealed that Kai, as a child, had a very close relationship with his father, a man who enjoyed engineering beyblades. The two played many battles together, delighting the young Kai and making him adore his father. However, when Kai's grandfather, Soichiro Hiwatari, learned of his son's playing rather than working, he dragged him and Kai both to his office at Hiwatari Enterprises. There he issued an ultimatum to Kai's father – to abandon his silly love for toys, or lose his position as heir to Hiwatari Enterprises. Kai's father chose beyblades, voicing a desire to make children smile as his reason.

Kai tried to go after his father as he walked away, but was held him back by his grandfather. At the tender age of ten, Kai took this to be rejection by his father and takes it upon himself to change his attitude. Donning face-paint, Kai begins his quest to destroy beyblades – the toys that 'stole' his father away. While his mother is present at the confrontation in the office, she seems to serve no role, neither aiding nor trying to prevent this rebellion.

Later, during Kai's and Tyson's battle in the regional championships, Voltaire turns up, demanding that the tournament be stopped. At this Kai's father steps in and tells him to leave Kai alone. Throughout the manga – unlike in the anime – however, Kai shows little personal development. His attitude remains largely coldly indifferent.

His rivalry with the Majestics team member lies with Robert rather than Johnny although like the anime he does lose to Johnny just before he demands to another battle in which Robert volunteers. The first time Kai faces Robert he loses horribly. The next time he faces Robert was in the world tournament which proved to be one of Kai's hardest battles at that point though in the second match he defeats Robert once again and claims that he can't stand the idea of anyone being better than him.

In the Beyblade epilogue, Kai is married to an unknown and unseen woman, with whom he has a son named Gou (Goh) Hiwatari, who is seen blading with Makoto, Tyson's son. Gou has an uncanny resemblance to Kai.

Voltaire Hiwatari: Voltaire is Kai's grandfather and one of the main antagonists in the first season of Beyblade, alongside his partner, Boris. He runs the abbey where Kai was raised and is part of BIOVOLT. He is the source of all Kai's misery. He made Kai's father leave in the manga when Susumu chose beyblading over Hiwatari Enterprise. He is very evil, and his raising is the cause of Kai's other side.

Susumu Hiwatari: He is Kai's father, who is only mentioned once in the Japanese version of V-Force, episode 5, but he is shown in the manga. He was made to leave by his father Voltaire, when he chose to beyblade and bring happiness to children rather than inherit a large company. Kai tried to run after him, but was restrained by his grandfather.

Gou Hiwatari: Gou (Goh) is Kai's son in the manga. He appears in the last chapter and is seen battling Tyson's son Makoto and Ray's daughter, Rin.

Kai and his Team 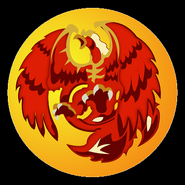 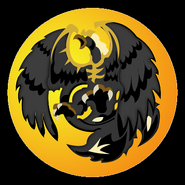 Black Dranzer Ms
Add a photo to this gallery
Retrieved from "https://hero.fandom.com/wiki/Kai_Hiwatari?oldid=2290816"
Community content is available under CC-BY-SA unless otherwise noted.