Kai Miyagusuku is one of the two tritagonists of the anime series Blood+. He is the adoptive brother of Saya Otonashi and Riku Miyagusuku.

He is voiced by Hiroyuki Yoshino in the Japanese version of the anime and Benjamin Diskin in the English version.

Kai is a tanned, athletic teen with brown eyes and average height. He has orange hair throughout season 1 & 2. After the year lapse from Riku's death, his hair is shown to have turned to brown and complexion a bit fairer (probably due to going out only at nighttime chiropteran hunting). He is 5 feet 9 inches tall.

In the beginning half, Kai is shown to be quite immature and selfish. He jumps to actions without thinking and fights out to subdue his inner conflicts. After George's death, he becomes the man of the family and tries to bind themselves together. However, he is over protective of both Saya and Riku, and is often way in over his head. At one point, David goes so far as to give him a pounding to teach him a lesson of the kind of world they live in.

As he struggles within himself regarding Saya after knowing her true identity, Riku also changes into something other than human. When Riku nearly died after Diva's attack the only reasons Kai could give for making Riku a chevalier were that he didn't want to lose Riku and end up alone. Even after hearing Kai's two completely selfish reasons, Saya still made Riku her chevalier. After Kai had finally come to accept the fact that Saya and Riku are different from him and manages to believe that they can still be a family, Riku died at Diva's hands, which devastates Kai.

Riku's death changes Kai. He faces his responsibilities, hones his skills to be ready, bears the torch of Red Shield to keep hope alive. He believes that Saya will come and his faith pays off. He also convinces Saya and Hagi to work with him and Red Shield again, after the former had gone through a period of not accepting anyone's help but the latter, and convinces Hagi to confess his feelings for Saya when she was about to kill herself.

Kai frequently quotes what his father would always say "Live for today, look forward to tomorrow", showing that he's an optimist.

Athletics: Kai was one of the most popular star athletes in his school excelling in baseball. After sustaining injury in one of his arms, he quits the baseball team and indulges into streetfights.

Marksmanship: Initially Kai has little skill in marksmanship, but he improves as the series goes on.

When George is kidnapped, Kai steals his father's M1911 pistol to try to rescue him. David confiscates it, but later returns it to show that he feels Kai had matured enough to handle it.

After Red Shield's HQ is destroyed, Kai hones his marksmanship skills, practicing with the pistol in the store at Glay's farmhouse. Kai uses it as his primary weapon for the remainder of the series. He also uses Igniter bullets to enhance his shots. 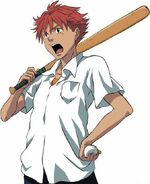 Kai punching the hospital wall after his father was injured.
Add a photo to this gallery
Retrieved from "https://hero.fandom.com/wiki/Kai_Miyagusuku?oldid=2294254"
Community content is available under CC-BY-SA unless otherwise noted.