Training with her friends.

Help her family to protect Japan.

Be with her friends.
Rehabilitate Nobunaga and his troops.

Kai started as one of the commanders of the Hōjō army. At first battle, she against Uesugi in Tonegawa. But the conflict was ended, the battles of Kantō temporarily subsided and Shingen has long since passed away after he told them the final words. After Nobunaga dies, Ieyasu and Sanada forces determined entered to Shinpu Castle and protect their armies from any damaged. Kai meets her master Ujiyasu Hōjō, but she wanna told him to take a serious approach to received one.

After Masamune was surrendered by troops, Hideyoshi eventually become the greatest ruler on the lands and revolves around Oshi Castle. When Kai deals with motivating men and breaks the water gate, the battles is still against them with Masamune's reinforcements and she defends Hōjō before the end of the conflicts. Kai enjoys her own destiny and believes that everyone has prevented Nobunaga from conquering many places, unwittingly accused her friends of being a sentient insurgent. Although Kai finally managed to save Yukimura and continuously protect her own life.

However, she was once again to serve Ujiyasu, the Hōjō arrived in Kakegawa Castle and assist Imagawa, Kai is often mistakes Naotora as a man based on her name. Even if she is remained loyal to her friends and family, Kai is respected by her master and prove herself to continues wars with them. She seems to remind her attitude and protect the last remnants of her lord's spirit, but also can help Kunoichi to do these deliberate acts. While Kai confronted Lady Hayakawa, but she made her father proud and tried to test her determination in battle. In addition, Kai may be defeated in Yukimura's final mission. 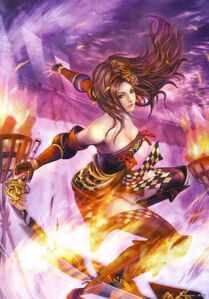 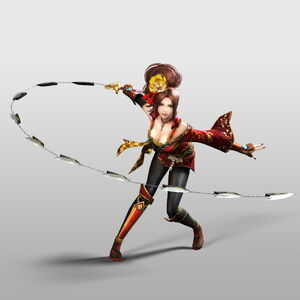 Kaihime in Samurai Warriors 4.
Add a photo to this gallery

Retrieved from "https://hero.fandom.com/wiki/Kaihime_(Koei)?oldid=1880993"
Community content is available under CC-BY-SA unless otherwise noted.