No information
Commander Kain Highwind, also known as the Hooded Man before his identity is revealed in The After Years, is a playable character in Final Fantasy IV and Final Fantasy IV: The After Years. He is a Dragoon from the kingdom of Baron, Cecil Harvey's childhood friend and adoptive older brother. He also has feelings for Rosa Joanna Farrell, but he hides them so they do not hinder his relationship with either of the two: Rosa in turn has feelings for Cecil.

Kain is Cecil's childhood friend, adoptive older brother, rival, and fellow knight. He begins as Cecil's stalwart ally through the beginnings of his ordeals, but is separated from the Dark Knight as a result of the earthquake Rydia caused. At some point afterward he comes under the thrall of Golbez's mind control, kidnapping Rosa and nearly killing Cecil when he tries to rescue her. Kain is later freed from Golbez's control when Tellahgravely wounds the latter with the mighty Meteor. Overcome with guilt and seeking atonement, he once again fights alongside Cecil and his friends, later leaving to become a Holy Dragoon in hopes of completing his atonement and to honor his father's legacy. He returns seventeen years later, tutoring Cecil's son Ceodore and helping to free Baron and save the world again from the threat of the Maenads and the Creator.

Kain usually wears full body armor that has shades of dark purple or blue. He alsowears a helmet the shape of a dragon's head that obscures most of his face and sharp spikes extend out of his armor on his shoulders, elbows and calves, to give it an even more draconian look. He has long blond hair, tied back in a ponytail in most appearances.

Kain is a calm, sometimes sarcastic young man, driven by his dream of following his father's footsteps of becoming a Dragoon and shunning the King's wish for Kain to follow Cecil's profession of a Dark Knight. He has been friends with Cecil and Rosa since they were young, but their relationship is strained by their rivalry as soldiers and their love for the same woman, although Kain hides his feelings. However, his susceptibility to being mind controlled and his having lost out on Rosa's affections to Cecil make him an easy pawn for Golbez's scheme. Once he is freed from Golbez's control, Kain is forgiven by Cecil and vows to redeem himself for his past actions. 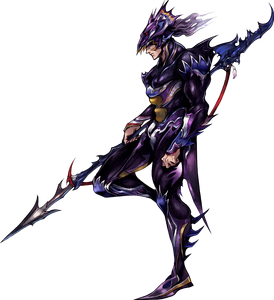