The Kakurangers are ninja descendants who fight evil with their special ninja skills. They are the main protagonists of Ninja Sentai Kakuranger.

400 years ago, the ninja and the Youkai had a great war. The legendary Sarutobi Sasuke and other four ninja sealed the Youkai Commander Nurarihyon and all his Youkai energies away in a cave protected by the "Seal Door". In the present, the only surviving Youkai, Kappa, tricks Sarutobi Sasuke and Kirigakure Saizo's descendants, Sasuke and Saizou, into releasing the Youkai by opening the "Seal Door". Now these two, joined by three other descendants of the great ninja become the Kakurangers to fight the Youkai, with the aid of the Three God Generals.

When Emperor Daidas and his army invaded Earth, the Kakurangers teamed up with the four Sentai that came before them, the Dairangers, Zyurangers, Jetmen, and Fivemen, to defeat him. Super Sentai World

The Kakurangers and Dairangers standing alongside each other on the other side. Toei Hero Daishugō

The Kakurangers would later return to team-up with the Ohrangers, who were fighting the invasion of Earth by the Machine Empire Baranoia, against the powerful Youkai Onbu-Obake and Machine Beast Bara Gear. Chouriki Sentai Ohranger: Ole vs. Kakuranger

In 2005, Sasuke teamed-up with his fellow Red ninja, Yousuke Shiina/HurricaneRed, to fight a strange new Youkai which had appeared attacking all ninjas it came across in search of the End Shuriken. They were aided by the appearance of a never before seen red ninja from ten years in the future, who they saw seemingly killed by the Youkai who proceeded to return to the future with what it believed was the End Shuriken. Shinobi 7: Spring Ninja Festival!

Years later, the Space Empire Zangyack invaded Earth. This threat was so great that all of the first 34 Super Sentai, including the Kakurangers, were needed to oppose them. The 34 Sentai put up a valiant fight against the ground forces, but when the Zangyack fleet itself attacked them, Akarenger told everyone to combine their powers and save the Earth. This destroyed the Zangyack fleet and resulted in the loss of their powers, which resurfaced as Ranger Keys, that were dispersed throughout the universe.

The keys were collected by AkaRed, and later utilized by the 35th Super Sentai, the Gokaigers, a group of five people from different planets who came to Earth in search of the Greatest Treasure in the Universe. Ep. 1: The Space Pirates Appear

The greater power of the Kakurangers was the last to be claimed. Ninjaman ultimately did not join the Kakuranger and all other Sentai heroes during the Great Legend War due to being locked away in a jar at the Negakure Temple for 10 years by the Sanshinshou after causing a lot of destruction when saving a little girl from animals that had escaped from a zoo. During an attack simultaneous to the Shinkenger and Goseiger battle against Buredoran of the Bloodbath, Metal Alice of the Agent of the Machine Onslaught Empire Matrintis ordered Zan-KT0 of the Shot to destroy the shrine, ultimately killing Ninjaman. However, this was rewritten when the Gokaigers eventually traveled back in time and protected the shrine and the jar when presented a mission by Domon of the Timerangers. Ep. 40: The Future is the Past

When the Gokaigers returned to the shrine to search for the Kakuranger's Greater Power they found the jar and smashed it, freeing Ninjaman. He explained why he was sealed, but wondered why the Sanshinshou did not free him. Gai Ikari then revealed to him the event of the Great Legend War. The Gokaigers decided to take him to the GokaiGalleon and fill him in on things like the Great Legend War and even their own fight with the Space Empire Zangyack and Basco ta Jolokia. They revealed to him that they are the 35th Super Sentai team and explained the Ranger Keys to him and how they have also gathered almost all of the previous Super Sentai teams Greater Powers except for five that Basco have stolen. They ultimately revealed that only the Greater Powers of Kakuranger was missing and in the end Ninjaman decided to stay with them in order to see if they are worthy or not. Ep. 45: The Confused Ninja

After a week where the Gokaiger have done nothing, Ninjaman decided to retrain the Gokaigers, though only Gai, Ahim and Don shown up. When Don and Gai started fighting due to an attack from Action Commander Evil Spirit Faith Healer Jyujyu and Marvelous, Joe, and Luka done nothing, Ninjaman felt that the Gokaiger are not worthy to be heroes period. However, after seeing Don and Gai stop themselves from hurting an untransformed Ahim, breaking Jyujyu's spell, Ninjaman realized that he had forgotten how to trust people in his efforts to not be overzealous and cause unneeded destruction like before. When he and the others were called to help Marvelous, Joe, and Luka fight Jyujyu, Ninjaman saw that they had faith in Ahim, Don, and Gai to break Jyujyu's spell and how it helped them to find Jyujyu.

NinjaBlack
Jiraiya
Add a photo to this gallery 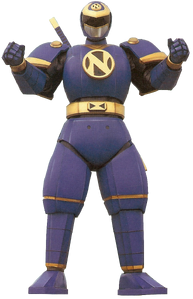 Ninjaman
Add a photo to this gallery

Retrieved from "https://hero.fandom.com/wiki/Kakurangers?oldid=1797682"
Community content is available under CC-BY-SA unless otherwise noted.