Member of the White Fang (formerly)

Supportive Parent
Kali Belladonna is a supporting character from the American animated webseries RWBY. She is the supportive mother of Blake Belladonna and wife of Ghira Belladonna.

She is voiced by Tara Plutt in the English version, and by Megumi Toyoguchi in the Japanese version.

Kali has similar resemblance to her daughter. She is also quite stunning and wore black and white garbs similar to a kimono.

As been a cat faunus Kali has a cat-like appearance and having to cat-like ears.

Kali is a kind, friendly woman who loves her husband and daughter deeply. She is shown to be a very supportive mother toward Blake. She is also very compassionate, expressing distress towards the attack on Vale despite the flaws that she attributes to the city. Kali seems to enjoy socializing, as suggested in "A Much Needed Talk" when she contrasts Blake's quiet nature to Sun Wukong's sociability, the latter of whom she wants to hear more about Team RWBY from.

Kali can be quite bold and fearless, shooting at White Fang members and angrily yelling at them to leave her house. 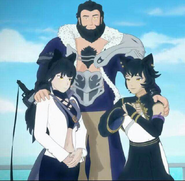 Retrieved from "https://hero.fandom.com/wiki/Kali_Belladonna?oldid=2276805"
Community content is available under CC-BY-SA unless otherwise noted.