Guardian of Earth
The old man

Kami is the overarching protagonist from the Dragonball franchise. He was the guardian of the Earth, and together with Mr. Popo lived upon the Lookout. He trained Son Goku as well as his friends later in the series. In the end he combined with his other half Piccolo, and they were one once again. In Dragon Ball GT, because Kami has merged with Piccolo, Kami has died when Piccolo sacrificed himself to protect all the humans when the Earth blew up.

Kami crashed on Earth millenia ago from the planet Namek with little memory of his life prior to the crash, as the strongest being on the planet at the time and one with a basic blank slate he was entrusted as guardian of the Earth by Lord Enma, Kaio, and various other spiritual overseers. In conjunction with his natural Namekian powers and attributes Kaim undertook various and, eventually, every form of martial arts. To accompany his martial arts training, Kami underwent frequent and deep bouts of meditation.

Eventually Kami tried to purge himself of his inner evil to achieve spiritual purity as he felt was befitting the appointed guardian of Earth. In his efforts to purge his evil side though Kami unwittingly created Piccolo Daimao, a manifestation of his inner evil made flesh and blood by Kami's spiritual power combined with certain Namekian traits. Piccolo not only came to life as his own being when spiritual purged from Kami but worse still had all of Kami's powers and skills.

When Son Goku was made aware of and sent to Earth's lookout tower for spiritual training with the Earth God himself to combat the evil Piccolo Daimao, he was soon surprised to discover that Kami looked exactly like Piccolo. Upon meeting with Goku, Kami's assistant Mr. Popo told Goku of Piccolo's origin to explain the identical appearance. Kami had been waiting some time for Goku and was all too glad to teach Goku what he needed to defeat his evil half. Despite Kami's wish to help, he was too old to both fight Piccolo himself and to properly spar with Goku. Instead Kami simply offered instruction and new techniques to Goku, while Mr. Popo provided the actual physical follow-through for the exercises and sparing. Goku would put the training to use upon his return to Earth and kill Piccolo, however, the evil warlord used his powers to spawn one last offspring before he died and upon his death, transferred his essence into it, creating Ma Junior. Goku would eventually confront and defeat Ma Junior as well, with even further help offered by Kami.

By the time of Dragon Ball 's follow-up series, Dragon Ball Z, Ma Junior, or simply Piccolo, was some what placated, though still wishing to kill Son Goku if he ever got the chance, (which eventually did get). After which Goku was killed by Piccolo, along with his estranged brother Raditz. The two brothers were apparently members of an alien race called Saiyans and before Raditz died, he had summoned two other Saiyans to Earth to complete his assignment to destroy it. In an effort to prepare for the Saiyans arrival Goku's friends and training partners, "the Z Warriors," were invited to Kami's look-out to receive training similar to Goku's.

Well into the series third arc, the Android Saga, Kami reveals that he is on the verge of death, due to his extreme old age. Piccolo, who had long since been redeemed from villain, to loose-cannon, to anti-hero, had been summoned to Kami's Lookout. The Guardian of Earth wished to use a Namekian osmosis techniques called fusion to merge with Piccolo again. Though it meant that Kami would continue to exists as a part of Piccolo, it also meant that his organized ego would quickly fade to nothing as it was absorbed. Kami had little concern for himself however and had requested the fusion with his other half, as Piccolo was powerful enough to deal with the new threat facing Earth, and to see to it his hard earned powers and knowledge were not lost to the world, wishing for Piccolo to inherit them. Piccolo was all too willing to accept the power boost and fused with Kami, again becoming one with him. Piccolo's ego remained dominant, but with Kami's influence, expanding Piccolo's empathy. 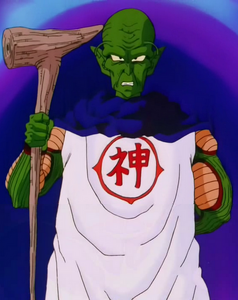 Kami in the Garlic Jr. Saga.