Convince Simon to believe in himself (succeeded)

Kamina is one of the main characters of the anime series Tengen Toppa Gurren Lagann. He along with Simon come from Jeeha Village and is the founder of Team Gurren (later Team Dai-Gurren). He motivates Simon with his speeches and determination to try to make a hero out of him. With his hot-blooded attitude, he takes on everything and anything. During the first arc, Kamina died in battle by the hands of one of the Beastman Four Supreme Generals, Thymilph.

Despite his tragic end, Kamina still plays an important role in the main character's lives, but mostly to Simon, to whom he acts as spiritual motivation to keep on fighting. In the end, Kamina's spirit, determination, and motivation finally succeeded in changing Simon into the great hero, leader, and saviour of humanity he is today thus finally fulfilling his dream of motivating Simon to believe in himself.

Kamina is tall and well built, and prides himself on being "manly and tough." He has light blue, short, spiky hair and is frequently seen wearing his trademark red sunglasses that cover his red eyes. His skin is tan, and he has tattoos along both of his arms which extend to his shoulders and his upper back.

At first glance, Kamina was a boisterous, hotheaded and arrogant man. He demands recognition and seems hungry for greatness, illustrated in his tendency to call himself "the Mighty Kamina" and his signature catchphrase, "Just who the Hell do you think I am?!" He is an undetterable idealist, often to the point of ignorance; Yoko has described him as "a man of unlimited stupidity." Kamina is also very perverted, declaring that the urge to stare at beautiful women is the definition of a man.

However, Kamina was also extremely determined and never lets anything keep him down for long. Even discovering that his father was dead only solemned him for a night or two (visibly at least). He is also devoted to defending and supporting his friends and loved ones, fighting with all his strength to protect them. In turn, he is very charismatic in the heat of battle, able to inspire even the timid Simon to accomplish great feats and almost single-handedly set the foundations for Team Dai-Gurren.

Despite his often brazen and practically insane actions, Kamina is fairly insightful, as his bombast and seemingly blind confidence usually mask his true intelligence in planning and combat. He even personally admits that his bravado and fearlessness is mostly a device he uses to hide his own worries and to support others, and that he thinks people like Simon are the real heroes. He has stated that his drive in the war against the Beastmen was not started for personal glory or vengeance, but a desire to give future generations a world without fear, a future where children are free to look up to the sky without fear. Despite his often moronic actions, he does have some level of common sense, pointing out that fleeing from Dai-Gunzan would leave them wide open to attack. All this confirms that Kamina has a much more complicated personality than his usual behaviour would insinuate. 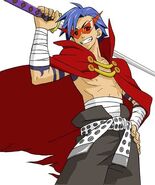 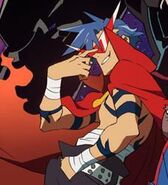 Gurren Lagann
Add a photo to this gallery
Retrieved from "https://hero.fandom.com/wiki/Kamina?oldid=1835938"
Community content is available under CC-BY-SA unless otherwise noted.