Kanade Amou is a dead partner of Tsubasa Kazanari, who sacrificed herself to save Hibiki from the Noise aliens.

Kanade is tall and has orange hair with red eyes. Her concert clothes are white and pink, with a wing on her back, while her armor Symphogear is orange, black and white. Her workout clothes consist of a white T-shirt with red shorts, as seen in episode 4. Also, in episode 9, she wears a mechanic-like outfit.

Kanade is a cheerful and brave person. She lost her family during a noise attack, although she didn't lose hope. When she died, the last words that she spoken to Tsubasa were: "Do you know, Tsubasa? Doing your hardest, really leaves you empty".

On the SZS official page Kanade describes herself :"However, against an opponent that was defined as the enemy, I also have to use the severe intensity everywhere. My spicy, bright-spirited behavior is noticeable."

Five years ago, when her family was killed in a Noise attack, she was given harsh medical treatment to make her body compatible with the Gungnir relic. She had since performed alongside Tsubasa, growing an appreciation for letting others hear her songs and forming the vocal duo, Zwei Wing. Two years ago, she sacrificed herself to protect Hibiki during a Noise attack, singing a "swan song" which destroyed them and herself. During the attack, a piece of her armor was implanted in Hibiki's body, allowing her to use the same powers.

By nature, Kanade had a very low compatibility coefficient with the Symphogear system and should have been unable to become a relic bearer. However, Division 2's Technology Specialist, Sakurai Ryoko, developed a control drug known as "LiNKER" and by taking an overdose of the drug, Kanade acquired the ability to use the power of Gungnir as a compatible candidate.

Her Symphogear is the Third Relic - Gungnir (now former) which is the same as Hibiki's, but has more armor and an Arms Gear which a lancer.

Her basic attack are "Last Meteor" and "Stardust Foton".

Kanade (奏) - The term Kanade (奏) means to play or perform, such as with a musical instrument, which would fit with the musical theme. In Chinese, even these name do not exist in this culture, it means to play. In japanese the verb "to play" is "Asobu (遊ぶ)". 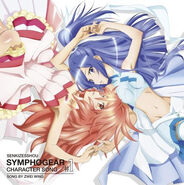 Retrieved from "https://hero.fandom.com/wiki/Kanade_Amou?oldid=1753995"
Community content is available under CC-BY-SA unless otherwise noted.