Sibling
Heroine from the Past

Kanae was a slender-built girl much like her younger sister, who was very tall for her age and, contrary to her pale complexion, had distinctly red lips. She had very-dark grey thick, straight hair that reached below her waist, worn down over her shoulders with two short clumps and bangs with arched ear-length on either side of her nose. Her eyes are pale-violet and slanting, shiny and bug-like to the sides of her nose with several prominent white sparkles reflecting light off them.

She wears a purple-tinted version of the traditional Demon Slayer Corps uniform, as well as a piece of fabric all over her calves and pale straped sandals. She also sported a pair of green-pink butterfly hairpins, which she wore painted on either side of her head, which was later used as a memento by her younger adoptive sister, Kanao Tsuyuri.

She was also wearing a a white, light green and pink butterfly-patterned haori, which Shinobu Kocho currently wears.

Kanae was the polar opposite of her sister Shinobu; she was a sweet, patient and kind girl with an easy-going personality, which she is almost always seen in a soft smile on her face in the flashbacks of Shinobu and Kanao.

As Sanemi Shinazugawa chuckled at her leader Kagaya Ubuyashiki, she showed compassion for him and politely told Sanemi about how Kagaya Ubuyashiki is really caring for the Demon Slayers under his command. She also had a vision of being able to live alongside the Demons peacefully one day amid all the pain and death they caused on humans, which encouraged Shinobu to strive to do likewise. Tragically after Kanae's violent death, Shinobu abandons that effort and walked down on vengeful path which ultimately proved to be self-destructive. 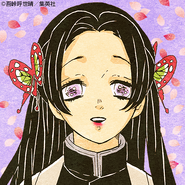 Kanae's face in the manga 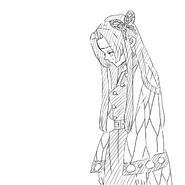 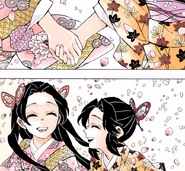 Kanae and Shinobu ascending to paradise