Mentoring Ezra
Being with Hera

Parents
Syndulla clan (Honorary member; posthumously due to being added to the Syndulla Family Kalikori by Hera)
Jacen Syndulla (son)

Caleb Dume was a Force-sensitive human male native to the galactic capital Coruscant who lived during the Fall of the Republic and the Imperial Era. At a young age he was inducted into the Jedi Order and eventually became the Padawan of Master Depa Billaba during the Clone Wars. At the climax of the war, Darth Sidious initiated Order 66, which directed the Grand Army of the Republic's clone soldiers to kill their Jedi comrades.

Due to his master's sacrifice, Caleb was able to evade Order 66, eventually taking up the name Kanan Jarrus to hide his true identity. Years later he met a Twi'lek pilot named Hera Syndulla who owned a ship called the Ghost. Jarrus and Syndulla joined forces and began openly rebelling against the tyrannical Galactic Empire. As time passed, Sabine Wren and Garazeb Orrelios also joined the blossoming rebel cell.

Five years before the outbreak of the Galactic Civil War, a young force-sensitive boy named Ezra Bridger joined the crew of the Ghost. Kanan decided to train Ezra in the ways of the Jedi and the Force, and began to embrace his tragic past more in the process. A few months before the destruction of the First Death Star, Kanan perished whilst attempting to liberate Syndulla from Imperial captivity.

Kanan had the privilege of having had Jedi training in the past. While he had left the Jedi side of him behind, he still carried a lightsaber around with him. Additionally, Kanan also used a blaster, something not commonly used by Jedi. While Kanan was not the owner of the Ghost, he was still considered the leader of the rebels. In terms of personality, Kanan was very authoritative. As the leader of the rebels, he was typically the one issuing orders. On the other hand, Kanan was also very relaxed. However, his past has hardened Kanan in ways, and he has carried his share of regrets, including the guilt he felt in running while his master gave her life to protect him, remaining elusive and secretive of his Jedi past. In his final duel against the Inquisitor, when he thought he'd lost his apprentice Kanan gained some enlightenment that enabled him to not only defeat his enemy but gain some closure when he realized however afraid he might be, he only needs to remember that the Force is stronger and would guide him.

When he had the Inquisitor at his mercy, Kanan chose to be the better man and spare him, and his words to the Inquisitor, that killing Ezra was a mistake, meant he had nothing left to fear, meaning he'd gained a greater focus to vanquish his foe.

The Clone Wars left Kanan with emotional scars, since his crew started working with Phoenix Squadron, and he has become uncomfortable with its military procedures, and desired to go back to the way they used to work, on their own, sticking it to the Empire and giving to the needy, something he deemed a noble cause. His emotional scars would flare again when the help Ahsoka sent him and his friends to recruit turned out to be Clone Troopers, Rex, Gregor, and Wolffe. Kanan didn't just hold clones in part for his master's death but because of how betrayed he felt, after all the battles the clones and Jedi fought together side-by-side and it took only a single order for them to turn against the warriors who'd led, protected and guided them. It was also because of how he was hunted and betrayed by the clones he had served with, soldiers he had considered his friends. Despite his animosity, Kanan's conscience disallowed him from leaving Rex and his brothers to die, even though trust continued to be an issue, as they bickered over what Ezra needed to learn as a Rebel. But when Rex was willing to sacrifice himself for the Rebels, Kanan came to his rescue and appeared to finally put his stigma against clones behind him when he gave Rex a salute of mutual respect.

Apart from this, Kanan was a fatherly figure for Ezra, often giving him advice and support. However he initially struggled to be a teacher due to not passing his own Jedi training when they first encountered the Grand Inquisitor, Kanan realized he had to learn to be a master as much as Ezra had to learn to be a Jedi. Later, he desired to protect Ezra from falling to the dark side, which was his greatest fear. He also mentored Sabine, who became something of a daughter figure towards him and helped her overcome her dark past when he taught her train with the Darksaber. He was one of the few individuals to get along with Chopper and often get Zeb to behave himself.

After becoming blind, Kanan distanced himself from his friends and coming into conflict with his own Padawan. However, after meeting the Bendu, Kanan was able to see things differently by looking through the Force and finally reconciled with his friends. At the end of his life, Kanan stopped a fuel depot from going off by holding back the explosion so Hera, Ezra and Sabine could escape so he could protect the ones he loved.

Kanan wore an outfit that was intentionally made to resemble a bounty hunter's, in order to disguise his Jedi nature, consisting of a protective guard fitted on his right arm to protect him from plasma fire, a utility belt strapped around his waist, and constantly carried around with him a dual-phase Lightsaber as his strongest weapon, which splits into two pieces for concealment. Additionally, Kanan also carried a DL-18 blaster.

Kanan never got to complete his Jedi training but still learned and developed a fair share of skills in the Force. He could Force Jump (leaping high enough to escape Agent Kallus), use Animal Friendship (connecting with a Loth-cat), Mind Tricks (manipulating Stormtroopers), he was a capable telekinetic, and had a fine Force Sense. His telekinesis utilized in the form of Force Push was average, but still formidable enough, especially being able to push Darth Vader with the Force and send him backwards a fair distance (albeit with the aid of Ezra as well), though he was able to hold back the Grand Inquisitor and then pinning him to the ceiling. He could also Force Pull Stormtroopers, as demonstrated during his infiltration of the Star Destroyer to rescue Ezra and the Rebel leader Jun Sato.

A testament to Kanan's abilities with the Force was proven at the cost of his eyes, when the former sith lord Darth Maul struck him with his lightsaber, blinding Kanan. Taking a discarded Temple Guard mask to cover his damaged eyes, Kanan challenged Maul, and the former sith foolishly underestimated Kanan, who remembered his training and used the Force to amplify his other senses, enabling him not only to beat Maul in a brief clash of their blades but send him over the edge of the Sith Temple terrace. With Bendu's help, he could use the ability of Force Sight, to see in ways that others cannot, making him never truly blind.

Under his master's tutelage, Kanan focused on Form III, and with each encounter with the Grand Inquisitor, his skills increased. He was capable of deflecting blaster fire, and in his final duel with the Inquisitor, he used Jar'Kai (wielding two lightsabers at once, his own and Ezra's) and was finally able to defeat his enemy. He was even able to hold his own and match the Seventh Sister (who was an agile and acrobatic duelist who had her lightsaber set on single blade) in a duel during the mission to save the Force-sensitive children from the Inquisitors, being able to fight long enough before she managed to conclude the duel with an acrobatic kick to his abdomen. His technique, regardless of being improved both by independent practice and by advancing through dueling the Grand Inquisitor, required improvement. During his second duel with the Seventh Sister after the speeder chase to escape the Inquisitors, Kanan managed to hold off against the Seventh Sister who wielded her weapon in a double-bladed form with some difficulty. Kanan also had trouble defending himself against multiple duelists, including both the Seventh Sister and Fifth Brother before Ahsoka arrived to defeat them both.

He was also vulnerable against power attacks, as demonstrated being driven back by the Fifth Brother's brute force strikes, and the slashes of Darth Vader, rather easily. However, his lightsaber skills have improved over time, but still, he was still less advanced than the Inquisitors, and only managed to defeat the Grand Inquisitor through his use of dual blades, and before he acquired Ezra's blade, the Grand Inquisitor almost managed to defeat him before Ezra showed up.

As months passed, Kanan's skill with lightsaber dueling improved considerably. During Kanan and Ezra's duel against the Seventh Sister and Fifth brother on Oosalon, he was able to block the Fifth Brother's brute force strikes very well and managed to push him back slightly with his own strength repeatedly throughout the fight. Kanan even managed to hit the Fifth Brother square in the face with a punch in their duel too before escaping and was able to match the Seventh Sister fairly well. She could not overpower him without the help of her Parrot droid.

During Kanan's encounter in the Lothal Jedi Temple (regardless of it all being a vision), Kanan managed to compete with the Sentinel while the Jedi Temple Guard used both single and double-bladed setting on his lightsaber, though the Guard stated that Kanan's mastery of lightsaber combat was lacking, and managed to push him back and send him staggering with the Force rather easily. Regardless, Kanan's footwork was reasonably good as he could recover balance almost instantly after being driven back by the Force push. His lightsaber throw technique was poor considering when he hurled it, the Sentinel swatted it aside rather easily. But when Kanan acquired a red-bladed lightsaber in the "temple dojo", he managed to hold his own the Sentinel and his other two Temple Guard associates for some time, though he was eventually overpowered.

After Order 66, Kanan locked away his lightsaber and started using a blaster instead, becoming highly skilled with it, and he often operates the dorsal turret of the Ghost during space battles. During his final duel with the Grand Inquisitor, Kanan utilized the stun blaster function of Ezra's lightsaber to force his enemy on the defensive and give himself an impressive advantage.

Besides his Force powers and weapon skills, Kanan is a skilled martial artist, able to easily beat trained stormtroopers, even unarmed and without his powers. He has learned to act covertly as a Rebel and is a capable leader.

Kanan is set to appear in Disney INFINITY's third installment as a playable character. 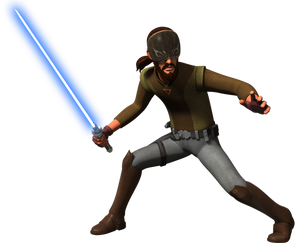 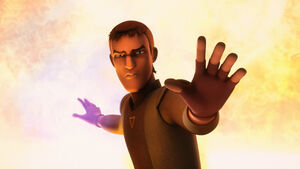 Kanan's last moments before sacrificing himself.