Providing and caring for Roo.

Provide and care for Roo.

Nurturing Animal
Kanga is a anthropomorphic, stuffed kangaroo belonging to Christopher Robin. She and her son Roo got their names because their names without space make word kangaroo (Kanga + Roo = Kangaroo). She first appeared as the supporting character in Winnie the Pooh series. Hospitable and gentle, Kanga is the mother of Roo and a good friend to the Hundred Acre Wood residents, most notably Tigger. She is a supporting character in The Many Adventures of Winnie the Pooh, The Tigger Movie, Piglet's Big Movie, Winnie the Pooh (2011) and My Friends Tigger and Pooh and the deuteragonist of Pooh's Heffalump Movie.

In Piglet's Big Movie, Kanga and Roo are implied to have been the newest members of the Hundred Acre Wood (despite Blustery Day making it clear that Tigger is the newest resident). Upon their arrival, Kanga was mistaken for a predator by Rabbit, Tigger, Pooh, and Piglet. However, after a misadventure, they come to realize Kanga's true nature and warmly welcomed her and Roo into their circle.

Kanga lives in a literal treehouse (which shares a joint mailbox, indicating two residences rather than one) with her son Roo. She spends much of her time at home while Roo typically joins the adventures of Pooh and the others. Kanga acts much like a typical housewife (despite being a single mother) as she is mostly seen cleaning and tending to Roo's needs. Of all the Hundred Acre Woods residents, Kanga has the strongest friendship with Tigger, whom she sometimes treats as her own. This makes sense as Tigger and Roo often treat each other as siblings. Kanga is notable in that she is one of the few characters that Tigger does not bounce. Instead, he treats her extremely respectfully, often referring to her as "Mrs. Kanga", even though in Un-Valentine's Day, he does bounce Kanga, claiming "you always bounce someone you love".

Kanga is the sweet and caring mother of Roo. However, she also acts as a motherly figure to the other Hundred Acre Wood characters, giving advice and help to those in need. She is notable in a way, as she is one of the few characters that Tigger doesn't bounce. Instead, he treats her respectfully, often referring to her as Mrs. Kanga. 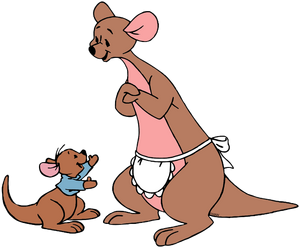 Kanga and her son, Roo 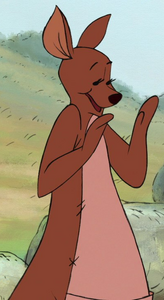 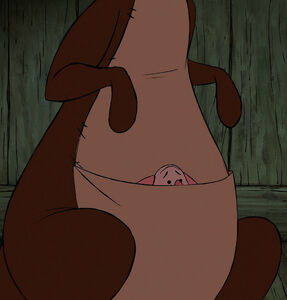 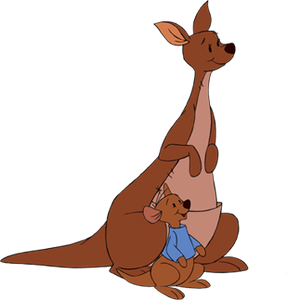