Heroes Wiki
Register
Don't have an account?
Sign In
Advertisement
in: Articles under construction, Animals, Anthropomorphic,
and 18 more

Kangaroo Jack', also known as Jackie Legs, is the titular character of the live action film franchise of the same name. His friends are Charlie Carbone and Louis Booker.

He was voiced by an uncredited Adam Garcia in the first film and by Jeff Bennett in the second film.

Jackie Legs displays typical animalistic tendencies such as being easily startled, curious, and somewhat territorial, kicking Charlie in the chest frequently during their alterations.

His more peculiar aspects comes from his interactions between Louis and Charlie as he often finds himself outsmarting the two in their pursuit of the stolen money on the Brooklyn jacket he's wearing. He has also gained a fascination with candy, especially licorice.

In Charlie's dream, his personality is more animated, having a love for rap music and the color red, taking a liking to his signature Brooklyn jacket.

On the plane, Louis opens the package, against Frankie's instructions, to find $50,000 in cash. Upon landing in Australia, they rent a Land Cruiser and head to Mr. Smith. On their way, they accidentally hit a red kangaroo. Thinking it is dead, Louis puts his "lucky jacket" on the kangaroo and with Charlie's sunglasses to pose for photographs as a joke, as he thinks the kangaroo looks like "Jackie Legs", one of Sal's henchmen from Canarsie. The kangaroo then regains consciousness and hops away with one problem; the $50,000 was in the jacket. Charlie and Louis get into their car and try to reclaim the money from the jacket on the kangaroo, but the ensuing chase ends with the duo running into a field of termite mounds and crashing into a pile of rocks. 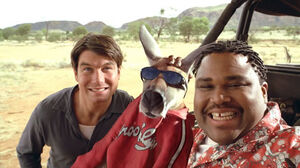