1st year cadet at IS Academy
IS representative of Japan

Complete her personal IS (succeeded), Come out of her sister's shadow

Robot Pilot, Genius, Insecure Heroine, Dandere
Kanzashi Sarashiki is a heroine in the light novel and anime series Infinite Stratos. She is the younger sister of Tatenashi Sarashiki, a first year student at the IS Academy and the IS Representative of Japan. She is the last heroine to be introduced in the series, and soon becomes yet another competitor for the heart of Ichika Orimura.

Kanzashi has blue hair and dark red eyes like her older sister. Her IS Academy uniform consists of the typical white and red blouse with two triangular hairpins on both sides of her head (right and left) and yellow leggings. She also wears a pair of glasses.

Kanzashi is the polar opposite of Tatenashi; while her older sister is cheerful, talkative and very forward, Kanzashi is far more reserved. She is also a hikikomori, spending most of her spare time under a blanket in her room watching anime. She is a huge fan of anime and idolizes anime heroes. She was initially very reluctant to team up with Ichika, due to being forced to work on his IS instead of making her own, but opened up to him after a large amount of persuasion.

Her withdrawn nature is largely thanks to an inferiority complex she feels towards her sister; due to Tatenashi being better at pretty much everything, Kanzashi is deeply insecure and often keeps her distance from her sister, a trait she shares with Houki Shinonono. After learning that Ichika helping her out and offering to team up with her was an order he got from Tatenashi, she was shocked and got sent into a state of depression until Ichika snapped her out of it. After the fight with the Golem, Kanzashi learns that nobody is perfect and that everyone makes mistakes, finally gaining the courage to reconcile with her older sister.

Kanzashi is a representative candidate of Japan, therefore she possess above average knowledge and skills in piloting the IS. Her genius older sister even acknowledges that she has talent. However, she didn't get a personal IS because the lab where her IS was being designed delayed the construction to built Ichika's Byakushiki instead. By that reason, Kanzashi had to customize an Uchigane provided by the IS Academy, transforming it into Uchigane Nishiki. It was eventually finished before the Tag Team Tournament in volume 7. 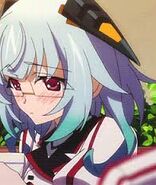 Add a photo to this gallery
Retrieved from "https://hero.fandom.com/wiki/Kanzashi_Sarashiki?oldid=1640724"
Community content is available under CC-BY-SA unless otherwise noted.