Kanzaki, The Breaker of God, Fallen Angel Ero Maid, Salvare000 - Be the salvation of those who cannot be saved, The Priestess

Hanging out with Touma and Index.

Pay back her debt to Touma.

Kaori Kanzaki is a major supporting protagonist in the light novel and anime series A Certain Magical Index. Originally a magician affiliated with the Amakusa-Style Remix of Church, she rejected them and eventually joined Necessarius where she met Index and Stiyl Magnus and became allies with them. She is also a saint and is currently one of the most formidable magicians in the series. Though she rejected the Amakusa Christians, she still feels a sort of longing for them, and eventually returns to them (they are now a part of Necessarius) to become their leader once again. She also appears in A Certain Magical Index SS: Kanzaki as the titular main protagonist.

She is a rather tall young lady, standing at 5'7, with long black hair tied up in a ponytail that reaches her hips and has a very attractive body along with large breasts. One can easily associate her white skin with that of a princess. She wears a short white T-shirt tied into a knot at the bottom, revealing her navel; a pair of jeans below with one side sawed off, revealing her thigh. Because the T-shirt is tied down, her breasts are much more noticeable. One can see her snowy white leg, from the thigh all the way down. She uses a two-meter-long nodachi called "Seven Heavens Seven Swords" as her weapon, it has been stated that her outfit follows the rules of asymmetry, which reinforces a small spell that allows her to balance herself and move herself more freely. She wears a flower patterned yukata when she is at Necessarius' dormitories. She sports a denim jacket over her usual attire in later novels.

Due to the tragic events in her life as the Supreme Pontiff, and later as a friend of Index, Kaori turned into a cold and taciturn woman, always serious, and not in the mood for jokes, the proverbial ice queen. Back then in the fight for Index, Touma asked why didn't she kill him, and the answer is that is not that she won't but she can't. This extends to divine beings, such as Archangel Gabriel, despite the danger he posed to the world, Kaori could only distract him, and wished for Touma to end the Angel Fall, as she could never kill Gabriel.

Her personality gradually changes, as with all the members of Necessarius that have met Touma, showing a kinder side to herself and others after Touma saves Index and helps to confront her past with the Amakusa-Style Remix of Church, feeling more comfortable and grateful to Touma becoming more prone to showing emotion and sometimes showing a little embarrassment with other people, having awkward interactions from her trying to thank Touma for saving the members of the Amakusa-Style Remix of Church on various occasions and Tsuchimikado Motoharu's attempts to encourage Kaori into various cosplay gear for Touma. Outside combat situations she pursues the behavior of a Yamato Nadeshiko, however her manner of speech and demeanor when serious resemble that of a Samurai. She has also been described as innocent when it comes to sexuality, and this is further supported by the fact that she can't really get most of Tsuchimikado's "make it up to Touma" daring suggestions. Due to her demeanor and long time of residence, she is usually referenced as "the representative of Necessarius dorms" when one is needed. By the statement of "Yamato Nadeshiko", it should be pointed that the phrase is a Japanese term meaning "personification of an idealized Japanese woman".

Furthermore, as an apparent attribute of magicians, she is very weak with machines as shown in when Academy City sends a washing machine which she complains about.This later lead into a comical situation where the Washing Machine goes haywire after Kaori punched in random buttons, after she put one of her pieces of cloth into it without proper judgment. In another opportunity she displayed tender tears of happiness when finally said washing machine worked perfectly as instructed, even going as far as hugging the object. This later leads to a running gag with the washing machine when Necessarius had to abandon their dorms and only take with them what was essential, Kaori noted that her most prized material possessions were her pet tropical fish and "her friend" a certain washing machine. She made absolutely sure that those two items would be saved even in that dire situation.

Touma is someone that Kaori feels a lot of debt to. This started after he saved Index, something Kaori was unable to do. Then he helped out the Amakusa's and she felt her debt to him continue to grow. She was once persuaded by Tsuchimikado Motoharu to try and pay off her debt to Touma by wearing a fallen angel ero maid costume for him. It is unknown what exactly happened but when they saw each other again Touma could only call her the "Fallen Angel Ero Maid", which made her angry. This led to some people believing that she is in love with him, although whether or not she is has yet to be seen. As a side effect, she became overly conscious toward Touma. When he disappeared after World War III, she showed signs of depression about living in a world where he was not around. She would sometimes think about all Touma has done and what he said to her when they first meet about protecting people. Her relationship with Touma is viewed with curiosity by others. Saiji said that he declined Knight Leader’s inviting Kaori to a ball after he visited the Amakusa Christian’s living quarters in London. He said: "You can go home. Our priestess likes to lead a young man rather than being led by an older gentleman." According to Orsola, it has now become a rumor that spread across half of London that Kaori has a crush on Kamijou Touma, which from their various interactions between the two leads to many people thinking Kaori has a crush on Touma. Even people like Laura Stuart makes fun of her using this rumor on at least one occasion. .

Stiyl is a partner. She shares and understands Stiyl's love and devotion toward Index.

Motoharu is someone who gets under her skin. Kaori shows definite concern towards Motoharu in his self-destructive magic use in the Angel Fall arc, stating to Touma that "Kanzaki's too kind," and that "If I were to use this method, I would definitely be stopped by her. She's just like that."Motoharu never lets her know that he was the one who cast the Red Spell to destroy Touma's house, giving her the illusion of being completely in Touma's debt for saving her life. He later encouraged her to wear "Fallen Angel Ero Maid" costume to tease her.

The anime's creator, Haimura Kiyotaka stated that Kanzaki Kaori's design had the most in it, and as such gave him the most trouble. Despite this, she has the least number of revisions in the characters introduced with designs in volume 1, second only to Komoe, easily matching the deformed style that was required with the light novel format.

A common theme that Haimura went for Stiyl and Kaori is that ever since their introduction in Volume 1, the gap between age and appearance in the magic side characters has been much greater than in the science side characters. When he read the first draft of Volume 1, he came with the impression that it was the story of children rebelling against the reasoning of adults. Stating that:"...I thought Kamijou would have seen Stiyl and Kaori as adults that used reasonings and principles that a child would refuse to accept." Haimura believed that the Index novels would go on for so long, as such he went with the designs that did not match their age, and by volume 7 Haimura began regretting his decision.

By volume 12, Kaori becomes affected by Haimura's deformed art style, and to which Haimura even references. Kaori's autumn look, apart from adding a denim jacket, Haimura also had her hair tie look more like a ribbon, as well as her pants low rise. 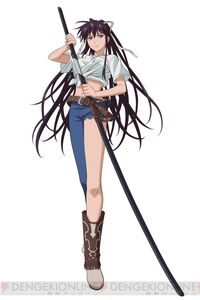 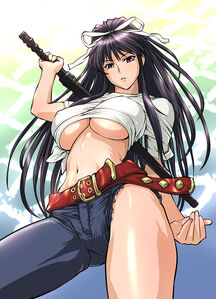 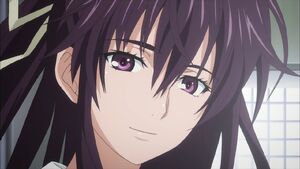 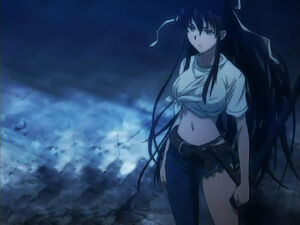 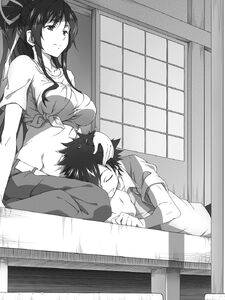 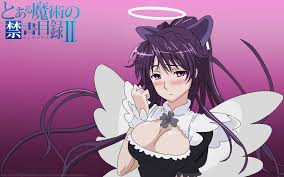 Kaori dressed as a maid 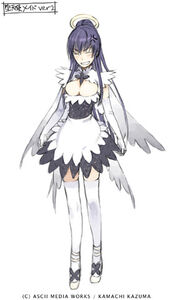 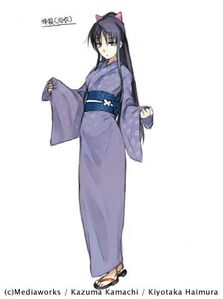 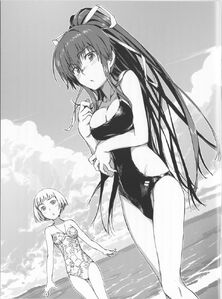 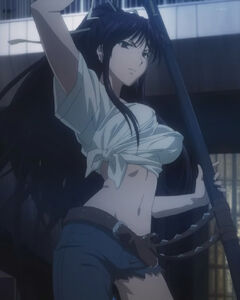 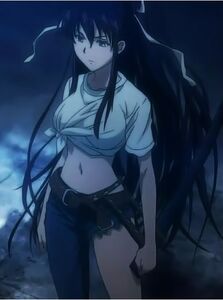 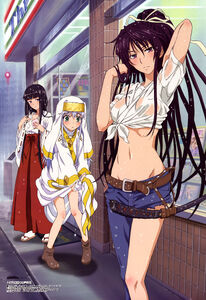 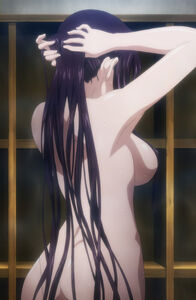 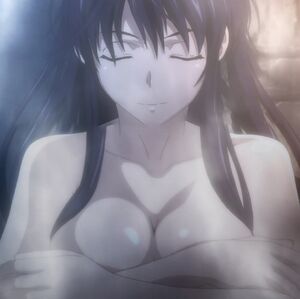 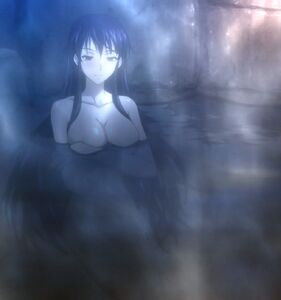 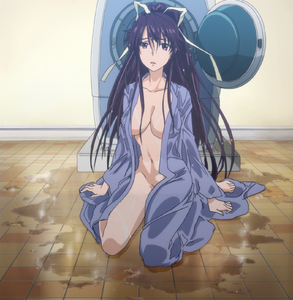 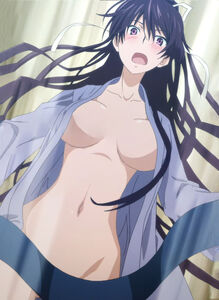 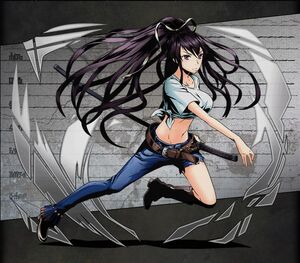 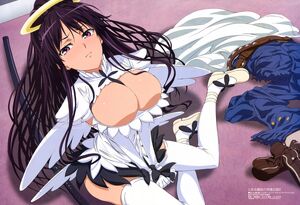 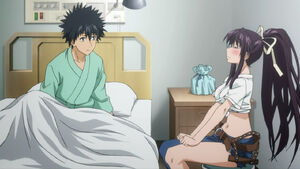 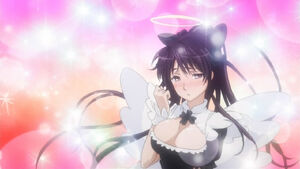