Kaoruko is considered wise and kind, and cares deeply for her granddaughter. She is very loving and loves flowers more than anything. It is said that her old speak-pattern was inherited by Tsubomi.

Cure Flower, like the other Cures, can use a forte wave but was not shown in the show due to her fighting at a diminished power level. Her powers are blessed in holy light. Aside for her attacks, she can also use some auxiliary attacks for her battle style:

Flower Candle - Cure Flower uses a flower petal and generates a magical circle below the enemy with her flower symbol, which it spins enemies on the ground.

Flower Carnival - Cure Flower throws several flower petals onto the enemy and generates a projection of herself, attacking the enemy controlling the Desertrian from the inside. 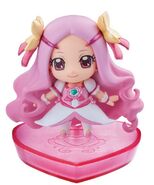 Add a photo to this gallery
Retrieved from "https://hero.fandom.com/wiki/Kaoruko_Hanasaki?oldid=1717967"
Community content is available under CC-BY-SA unless otherwise noted.