Kaos is a clone created by the Dark Portal Master himself, but defected to the side of the Skylanders. He is a Sensei that is a master of all the Battle Classes.

He is voiced by Richard Steven Horvitz who also voiced Billy, Alpha 5, and many others.

With Kaos having discovered the power of Mind Magic to create Doomlanders, one of his first creations was none other than a clone of himself! Figuring that no one in universe, including the Skylanders, could ever stand up to more than one Kaos, he unleashed his clone in his quest to take over Skylands. But to Kaos’ surprise, the clone –also being Kaos– wanted victory for himself! As a result, he decided to fight against his creator, in turn helping the Skylanders in their endeavor to defeat the real Kaos!

As a master of all Battle Classes, Kaos is able to summon mind weapons from each class and use them to attack enemies. He is also able to summon Doom Sharks, Doomlanders and Doom Hands to aid him in battle. His Sky-Chi ability transforms him into a large version of his head, able to fire lasers from its eyes. For his Soul Gem, he summons a portal that rains down various heavy objects upon enemies.

His mind weapon combos follow a slightly randomized pattern. His primary attack combos start with a swing of a Knight or Smasher weapon, followed by two Swashbuckler or Sentinel weapons, and ending with a Brawler attack. His secondary combos start with a Bazooker or Bowslinger shot, followed by a stream of lightning from a Sorcerer staff, and ending with a flurry of Ninja or Quickshot projectiles.

Kaos can master his Doom Sharks, Doom Hands, and his Psychic Shot attacks with the Spell Slinger upgrade path. This path increases the damage output and attack range of Kaos' long-ranged powers. His Doom Sharks grow larger, and his Doom Hands gain an upgrade to stun enemies. With these upgrades, he can attack aggressively with his various long-ranged powers to deal massive amounts of damage.

Alternatively, he can master his Brain Bash attacks and Doomlanders with the Up Close and Personal upgrade path. His Doomlanders become bigger and go out with an explosion when they disappear, while his close-ranged attacks are stronger and have a chance to slow down enemies. With these upgrades, he has wider support from his Doomlanders, while being able to deal more damage up close and personal. 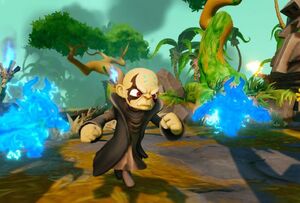 Retrieved from "https://hero.fandom.com/wiki/Kaos_(Clone)?oldid=2178372"
Community content is available under CC-BY-SA unless otherwise noted.