Heroes Wiki
Register
Don't have an account?
Sign In
Advertisement
in: Categories Needed, One Piece Heroes, Male,
and 14 more

Kappa is a character from the anime and manga series One Piece. He is a young boy who live in from Nanohana, who works shining shoes.

He is voiced by Junko Noda in Japanese and Tom Wayland (4Kids) and Monica Rial (Funimation) in English, both of whom have also voiced Tashigi in the same series.

Kappa has a black eyes, he wears a white turban and orange beads.

Kappa is very brave and will do what he can to help his country’s cause. He also becomes the rebel, as showing from Nefertari Vivi's father, Nefertari Cobra is responsible to brought affecting the nation.

Kappa wanted it to hit Bentham to destroy Nanohana who shows up from of the courage.

Kappa is having to hard beating with Daz Bonez and Zala who is quite resilien having a problem.

Kappa is joined with the rebellion along with Nefertari Cobra. He refuse to join as in, but he was too young to join rebellion that he is not for young children let us in. 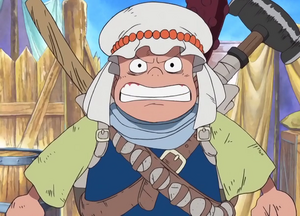