Heroes Wiki
Register
Don't have an account?
Sign In
Advertisement
in: Plagiarism, Candidate for Deletion, Power Rangers Heroes,
and 39 more

Kapri is formerly one of the three secondary antagonists (along with Marah and Zurgane) in the TV series Power Rangers: Ninja Storm. She is the sister of Marah, the niece of Lothor by marriage. Exactly who Lothor marries to gain this relation is never made clear. She is also Sensei Kanoi Watanabe's niece and Cam Watanabe's cousin. All is known is that their parents allowed them to stay with Lothor during his quest for power.

Kapri is meaner and more scornful than Marah (especially of Marah). Marah and Kapri constantly tried to prove to their uncle that they were evil enough to be in his army, and frequently showed each other up and the other generals in order to do so. Most often, Lothor considered them pests at best. Kapri used Lothor's PAM (Personal Alien Manager) to summon monstrous warriors from across the galaxy, and also to increase them to massive size.

On one occasion, Marah was apparently kicked out of Lothor's army when her old friend, Beevil, upstaged her. Miserable, she gained the trust of Dustin Brooks, the Yellow Wind Ranger, to defeat Beevil. In the end, however, it was revealed to be part of a deception to make Beevil more powerful. Beevil was destroyed, but Lothor and the other villains nonetheless congratulated Marah for betraying Dustin. Marah appeared to be regretful of it, though she claimed she was indeed evil.

Towards the end of the series, Marah and Kapri appeared to have hidden depths when they apparently arranged for Lothor's generals to overthrow him. It appeared that they were masterminds, merely hiding behind their ignorance, but this was soon revealed to be a ploy by Lothor himself. He was using them to destroy all of his own generals, and add their power to the Abyss of Evil, which would overflow and destroy the world. When their usefulness was at its end, though, Lothor betrayed them too and left them aboard the Dark Ship as it was about to explode. This led to them helping to free the captive Ninja Students and paved the way for their redemption.

One must ask how Marah and Kapri could suddenly turn from evil to good. One possibility is that when Lothor betrayed them, they realised that evil was not what they expected and thus rejected it. This is suggested by their childish arguments about which of them would rule over which part of the world.

Kapri's powers include teleportation, clothes transformation, energy projection, martial arts skils and shielding. She can project ice frost, control her sword while attacking her enemies, and can blow her enemies away with her breath. 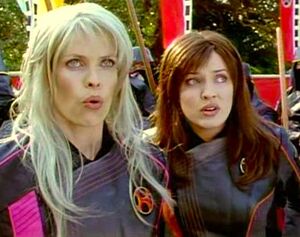 Marah and Kapri as students in the Wind Academy.