Kareem Abdul Lavash is a major character in the adult animated movie Sausage Party. He was voiced by David Krumholtz.

Kareem Abdul Lavash is a lavash that seems to have a bad relationship with Sammy Bagel Jr. because he hates him.

Kareem Abdul Lavash is falling out of a shopping cart with his some-part friend Sammy Bagel Jr.. Other scene he is together with Frank, Brenda & his some-part friend:Sammy, getting up a higher wall of the market aisle, where Frank finds Firewater in the liquor aisle. As Frank talks to Firewater in the cave, Lavash and the others go to the Mexican product aisle, that he is very conflicted with Teresa going with Brenda in a hidden place, because Teresa saids to her that it's a trap. When Tequila is going to the Mexican product aisle, he gets killed by El Douche. He founds the two aisles (one, is for Sammy Bagel Jr. and the other one, is for him).

After leaving Frank, Lavash goes back to his aisle. Later, upon learning the truth about the Great Beyond, Lavash becomes disillusioned.

In the fight scenes

He, with Sammy Bagel Jr. are throwing Ladles, and he in one part of the final battle, he is burning two gas bottles with his some-part friend. 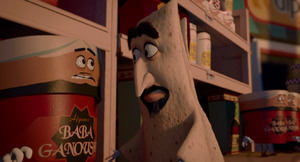 Kareem Abdul Lavash with a friend 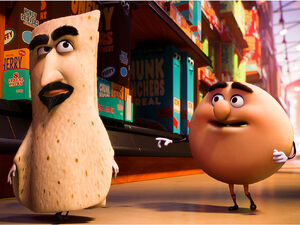