Exterminate all the walkers

She was a resident of Woodbury in Season 3, but in Season 4, she takes part in the community of the prison, and formed a relationship with Tyreese Williams. When she gets infected with the flu that affects a majority of the community in the prison, she is killed by Carol Peletier so that Karen does not infect others or reanimates when she dies.

She was portrayed by Melissa Ponzio.

The morning after the arena infiltration, Karen is one of the residents demanding Martinez to let her and the other townspeople leave town. When Richard Foster, a resident living in Woodbury, is attacked by zombies, she watches in horror and pleads with Andrea to do something, as he is suffering from his wounds. She asks repeatedly while Andrea just stands there, watching. The Governor then walks out of his apartment, aims his gun, shoots Richard in the head and then he walks back into his home like nothing happened.

Later that day, Karen, along with Paul, Eileen, and other townspeople gather outside The Governor's apartment until Andrea comes out and calms them down.

Karen is later seen on the front wall, armed with a rifle, on watch duty with the other guards. When Andrea inquires Karen on The Governor's whereabouts, she refuses to give her an answer, claiming that she doesn't know anything.

Karen argues with Martinez about Noah being trained for combat. She watches the Governor evaluate the townspeople with Andrea. She is on guard duty when Andrea returns to Woodbury, but lowers her gun when she realizes it's Andrea.

Karen joined the raid on the prison but retreated after they were overwhelmed by walkers. While on the road, she joins the other Woodbury survivors in protest against The Governor, but survived the massacre by hiding under a corpse, appearing to be dead. She hides in one of the trucks that The Governor left behind, and is later found by Daryl, Rick, and Michonne. Karen informs them about how The Governor massacred the other survivors and tells them that Andrea jumped the wall and left Woodbury, and the four go back to the town to look for her and meet the remaining citizens.

At the end of the episode she is brought back to the prison with the remaining Woodbury survivors.

Karen is seen on fence-duty killing walkers alongside David, Chloe, Henry, and another prison resident. Eventually, before leaving on the Big Spot supply run, Tyreese pays her a visit and kisses her. They discuss the suppply run and he confesses to Karen that he never enjoyed killing the walkers outside of the fence. He only did it to spend time with her.

Later that night, Karen and Tyreese are seen in their cell talking to one another before going to sleep.

Karen is seen with Tyreese until she leaves for Cell Block D. She stops at the showers for some water when she hears a strange noise. She investigates, finds nothing, and returns to her cell. However, a zombified Patrick emerges and follows Karen back to D Block. He feeds upon, and thus turns, a man and the two launch an attack on the prison inhabitants. Karen manages to survive and is led to safety by Tyreese. After displaying symptoms of the unknown illness, Karen is separated from the healthy people in the prison. She is later found murdered. Apparently, she was stabbed in the head and then dragged out into the courtyard. There, her corpse was set on fire. The circumstances of Karen's death remained a mystery until Carol confessed to Rick that she was the killer. She claims to have killed Karen both out of mercy and to prevent the infection from spreading within the prison. Although, in the end Karen's death was in vain as the flu spread anyway.

Tyreese reveals to Carol that he dreams of Karen every night. He later speculates that Lizzie may have killed Karen and David. Carol refutes this by pointing out that Lizzie would have let them reanimate, not set them on fire. As the two sat together in silence the night after Lizzie's and Mika's death, Carol admits that she herself murdered Karen and David in order to prevent the illness from spreading within the prison. Tyreese asks Carol if she killed her quickly, which she confirms. Carol then offers Tyreese the opportunity to deliver vengeance by handing him a gun and suggesting that he shoot her. Ultimately, Tyreese forgives Carol for murdering Karen. 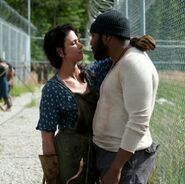 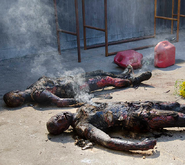 Karen and David's burnt corpses.
Add a photo to this gallery

Karen at the Walking Dead wiki

Retrieved from "https://hero.fandom.com/wiki/Karen_(The_Walking_Dead)?oldid=1950617"
Community content is available under CC-BY-SA unless otherwise noted.