Spending time with her son.

Kill Chucky and save her son Andy and Mike Norris (succeeded)

Karen Lee Barclay is the deuteragonist of the 1988 horror film Child's Play and its 2019 remake. She's a widowed mother who works at a Carson Pirie Scott & Co. department store to support herself and her son, Andy.

She is Andy Barclay's mother and portrayed by Catherine Hicks. In the 2019 remake, she is portrayed by Aubrey Plaza.

She first appeared when Andy made her breakfast in bed (a small bowl overfilled with Good Guy cereal, spilled glasses of milk and orange juice, and two burnt pieces of toast covered in large globs of butter).

She took him into the living room for him to open his presents where Andy insisted that he opened the larger present first in hopes it was a Good Guy Doll. Then, he opened it, only to find pants. Then, he tried the smaller present and uncovered a Good Guy Tool Set, upsetting him.

Karen goes to work where her best friend, Maggie Peterson drags her into the back alley where they find a pettler selling a Good Guy doll. After a short conversation, Karen purchases the doll and goes back to work, but is confronted by her boss.

She was told that she's able to leave at 5, but must be back at 7. Maggie then volunteers to babysit Andy while Karen is at work. Then, she gets home and gives Andy his new Good Guy doll which through a talking mechanic reveals its name as Chucky.

Later that night, Karen comes home to find that Maggie has been murdered and speaks with Detective Mike Norris who tells her that Maggie fell out the kitchen window.

Karen, severely upset that her best friend was dead, orders that Mike and his men leave her apartment. Later that night, she hears Andy in his bedroom talking, enters the room and asks who he was talking to which he replies by telling her he was talking to his doll who had revealed its full name as Charles Lee Ray.

Karen gets in an argument with Andy who asks her if it was about Maggie's death that she was yelling. She realizes that was the reason and goes to bed.

Karen takes Andy to school the next day who takes Chucky with him. Later that day, however, she is called to the police station and is informed that Eddie Caputo, the accomplice to the now-deceased serial killer Charles Lee Ray, was murdered at that Andy was found at the scene.

He was being questioned at the police station and Karen enters the room to talk to him. He insists that Chucky was alive and that the doll would kill him if he told them anything.

Nobody, even Karen, believed his story and was taken to a mental hospital for a little while. Then, Karen returns home and checks the box that Chucky came in. The batteries fall out and she reads on the box "Batteries included!" Then. She slowly approaches the doll, picks it up and checks the battery slots.

The slots are empty and the doll's head turns 180 degrees and says "Hi, I'm Chucky! Wanna play?" Then, she drops the doll in fright which it rolls under the couch. Then, she slowly retrieves it and threatens to throw it in the fire unless it talks which Chucky comes to life in her hands and attacks, followed by him escaping through the apartment elevator.

Karen makes her way to the police station to tell Mike what happened, but he did not believe her. So, she decides to find the peddler who sold her the doll, searching all over the slums of Chicago. After questioning several homeless people, she finally finds the man who sold it to her. Not being able to pay the amount of money he wants in order to tell her what he knew, he assaults her, but is then attacked by Mike who arrives from the shadows.

The peddler tells them that he found the doll in a burned down toy store. This disturbs Mike who tells Karen that the same night that the store was burned down the serial killer, Charles Lee Ray, was shot to death there. Still not believing Chucky was alive, Mike takes Karen home. Karen learns that Chucky is possessed by the soul of Charles Lee Ray and decided to check his abandoned house.

After a wild goose chase looking for Chucky all around the city, Karen and Mike finally find Chucky and Andy in her apartment. A long battle begins and Karen manages to trap Chucky in the fire place. Andy tosses a match in, burning the doll.

Then, Karen began calling the police while Andy went to get the First-Aid Kit to treat Mike's wounds from the battle. It is revealed that Chucky was still alive and the battle continued. Karen finally managed to severely cripple Chucky and the two were met by Mike's partner. Not believing the doll was alive, he brings Chucky's head to show Karen, Mike, and Andy that it was "as dead as it gets."

Without warning, Chucky's torso was crawling through the walls and burst through, attacking the partner. Then, they toss it at the wall and Mike finally shoots the heart, killing Chucky. The four leave the apartment without celebration, knowing it was too traumatizing.

While Karen did not appear for the rest of the series, she's mentioned in the second and third film which reveal that she was sent to a mental hospital for supporting Andy's story of Chucky.

Karen does not make a live appearance, but she can be heard from the phone while talking with Andy and it's implied that Karen is married to Detective Mike Norris and have a 10-year-old daughter name, Cecily. 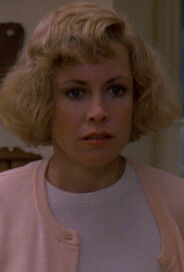