No information
Karen Kasumi is a supporting protagonist of CLAMP's incomplete series X. She is one of seven Dragons of Heaven.

She have alternate reality version of himself in Tsubasa: Reservoir Chronicle.

She is voiced by Wendee Lee (roles of T.K. Takaishi, Umi Ryuuzaki and Yoruichi Shihōin) in the English dub of the TV series.

Karen is a mature tall beauty. She has short curly red hair with bangs styled to the right. Karen often wears revealing clothing, due to workign as a call girl.

Initially, Karen came off as mysterious and somewhat aloof towards her her fellow Dragons of Heaven. This is likely largely due to her past shaping her personality to be quite solemn. However, she is still very friendly and nurturing in her own way, to the point of coming off as something of a big sister to the youger members like Yuzuriha. She also began to develop an unrequited crush on Seichiro Aoki, but out of respect for him being married and having a child, she never acted on it.

She was abused by her fundamentalist mother when her power to manipulate fire manifested in her childhood. After her mother died, she was, according to the anime television series, raised by a kindly priest, but she continued to remember her mother's last words: "No one would be sad if you died!"

As an adult, Karen works as a call girl for the soapland brothel "Flower", and often enters battle wearing her "work clothes", though she retains some of her childhood innocence in her beloved teddy bear. The relationship between Karen and Aoki is often mistaken as her feeling affection in a romantic sense for him.

In the anime series, Karen sacrifices her life to kill Yūto in order to protect Aoki. In the movie, Karen and Shōgo battle in the subway and Karen causes a massive explosion, causing them both to be crushed by debris. 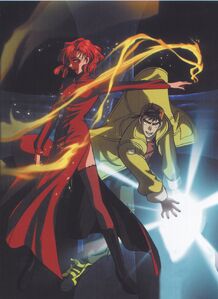 Retrieved from "https://hero.fandom.com/wiki/Karen_Kasumi?oldid=2096840"
Community content is available under CC-BY-SA unless otherwise noted.