Karen McCormick is a supporting character in South Park. She is Kenny and Kevin McCormick's little sister, Stuart and Carol McCormick's only daughter, and the youngest family member of the McCormicks.

She is voiced by Celeste Javier in the TV show, and Colleen O'Shaughnessy in the video games.

Playing with her doll

She appeared as a background character in "Best Friends Forever". She later appeared in "The Poor Kid", where she played a major role.

In her very first appearance, at the age of 4, Karen is portrayed with light skin, long, straight, dirty, scruffy brown hair, a very dirty green jacket with a maroon collar and mittens to match, along with navy blue pants, and black shoes.  In her first speaking appearance, at the age of 5, she looks similar, but her hair is much cleaner, neater in appearance, and a clean face other than a small dirt smudge on her eye, her clothes are clean, and she wears no mittens.  In her next appearances, age 6, she now has her face and clothes scruffy and covered in dirt again, and her hair is much dirtier and messier, along with much shorter and tied with two small maroon bows into two short ponytails.

Karen seems to be relatively quiet and timid, thus indicating shyness. She is almost always seen with Kenny. She is usually seen crying when dealing with stressful situations. When Mysterion is around, Karen seems to feel safer, since she does refer to him as her 'Guardian Angel'. Karen sometimes carries a pink princess doll around with her, or mostly stays around either Kenny, Kevin or her mom. It seems that Karen is lonely, and that she has very few friends, including Kevin and Kenny. In "The City Part of Town", when Kenny buys her a new doll, the first things she does is start talking to it, possibly for social reasons. Karen also seems naïve as to what might harm her, as shown in "Naughty Ninjas", where she brings a syringe previously owned by homeless people back into her house.

Kenny is very protective of her, using his Mysterion identity to comfort her in hard times and keep her out of danger. Kenny's protectiveness extends to such a degree that she considers him her "guardian angel". 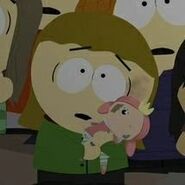 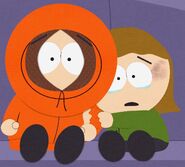 Karen Being Saved By Mysterion
Community content is available under CC-BY-SA unless otherwise noted.
Advertisement