Karin (カリン) or Korin (Funimation dub) is a supporting protagonist in the Dragon Ball manga and the anime Dragon Ball, who also assists in Dragon Ball Z and makes a brief appearance in Dragon Ball GT. He is a wise cat over 800 years old who lives atop a giant tower, and he is a martial arts master. He is a creator of the Senzu Beans.

His name is derived from K'arin, the Japanese name for the Chinese quince. His tower, the "Karin Tower" (カリン塔 Karin-tō), is a play on a type of fried dough cake called "karinto" (花林糖, karintō), which fits the common theme of the characters being named after foods.

He is widely known to western audiences as Korin, a pun on corn, as opposed to his Japanese name, Karin.

Akira Toriyama used his own cat as a model for Karin and drew him while the cat was sleeping, this is why Karin's eyes are closed (Toriyama's later cat was the inspiration for Beerus). Karin has blue fur in the manga, Dragon Ball Z: Super Saiya Densetsu and Dragon Ball Online. It is changed to white in the anime.

Korin is a Senbyō (仙猫, immortal cat) and is at least 800 years old when he makes his introduction in Dragon Ball.[2] He is a deity who lives at the top of Karin Tower, located right underneath Kami's Lookout. Karin is a legendary figure amongst the warrior-world, hailed as the "God of Martial Arts." This frequently leads to surprise and disbelief for those meeting him for the first time, as his appearance has yet to attain the fame of his reputation.

The young Muten Roshi was the first one of many to climb the tall Karin Tower and train under the legendary Karin. It took him three years to catch Karin and obtain the Sacred Water, which was rumored to tremendously increase one's strength and speed. Later, Karin plays a large role in Dragon Ball, when he trains Son Goku during the Red Ribbon Army Saga. At later points in the series, Karin lends his assistance periodically to Goku and the Z Warriors by lending Senzu beans to aid them in their battles.

When Goku enters the Sacred Land of Karin searching for his Grandpa Gohan's Four-Star Dragon Ball, he soon discovers that the ball is held by the native inhabitants, Bora and Upa. Gratefully, Bora gives the ball to Goku and tells him of the legend of the colossal tower, so high that not even airplanes can reach the top; if a person manages to climb to the top and drink the "Sacred Water" held by Karin, the Master of Combat, their strength and speed will be tremendously increased.

In addition to this, Karin is the only one who grows the Senzu neans which heal wounds and are equivalent to eating 10 days worth of food.

Learning of their defeat, the Red Ribbon Army sends the hired assassin, Tao Pai Pai, who easily kills Bora and overpowers and nearly kills Goku, if not for the Dragon Ball hidden in his clothing protecting him from Tao's Dodonpa. After coming to, Goku realizes his need to become stronger and begins the ascent, climbing throughout the day and into the night, sleeping with his tail clinging tightly to the handholds. After a day of straight climbing, an exhausted Goku reaches the top and, after a little searching, he encounters Karin, who is insulted at the boy's disbelief that he is the legendary master. After reading Goku's mind and finding his intentions pure, Karin tells the boy that he can have the Sacred Water. Goku leaps to grab it, but the cat immediately snatches it away, hooking it to his stick and declaring that the boy can indeed have it if he can take it from him.

Korin showing Goku how many years it took for Master Roshi to grab the Sacred Water from him Even Goku's superhuman agility is no match for the cat, as he leads the Saiyan on a chase around and around the tower, matching Goku's Zanzoken with his own, eventually becoming bored with the "workout" and calling an end for the day. An exhausted, yet curious Goku asks if anyone has managed to reach the water; the cat responds that the only one who did was Goku's old teacher, Muten Roshi, which shocks the boy. He is further shocked when, asking how long it took, Karin responds with three years. The next day, Goku awakes to find Karin dumping "garbage" over the side of the tower, including his Grandpa Gohan's Four-Star Dragon Ball. Furious, Goku immediately runs down the tower to retrieve it and climbs it again, while the old cat looks on with satisfaction; what took a day previously has now only taken three hours, a sign of the boy's growing strength.

On the evening of the second day, Goku considers taking the Sacred Water from Karin in his sleep, but at the last minute, he decides that he would "rather get it fair and square" even though he needed the strength to avenge the murder of his friend at the hands of Tao Pai Pai. Karin, who was actually pretending to sleep all this time, is deeply impressed by Goku's honorable and decent character, and becomes determined to train the boy to his full potential.

After three days of chasing and climbing, a determined Goku finally manages to outmaneuver Karin and take the bottle of Sacred Water from him. After drinking it, however, he does not notice any strength increase at all. Karin informs him that it is just tap water, and that it was Goku's intense exertion that made him much stronger and faster than before. A grateful Goku thanks Karin for the training, and climbs down the tower to face Tao Pai Pai again. In an anime filler, after Goku tells Tao about the Sacred Water during their second fight, the assassin climbs the tower to get the power for himself. On the top, Karin sensed a wicked man like Tao and tricked him, by only giving him the "Sacred" Water without the training, which has no benefits. He then calls and gives Tao a Dark Kinto'un, but as soon as Tao almost reaches the bottom, the cloud (through Karin's control) makes him fall through it, rather than let him fly all the way down on it.

When Yajirobe carries Goku up the Karin Tower from his first confrontation with the infamous Piccolo Daimao, Karin reveals that he really has special water that unleashes the drinker’s inner power, the Ultra Divine Water. However, the water itself is so dangerous that he refuses to let Goku journey to retrieve it until learning that Piccolo had been released. After a grueling trek and overcoming numerous obstacles (in anime only), Goku and Yajirobe reach the Ultra Divine Water. Tasting a single drop of the Ultra Divine Water nearly killed Yajirobe, who then begs the Saiyan not to drink it. However, Goku drinks it deeply, sending him into agony as well. After a couple of hours of agony, the water gave him the power needed to defeat Piccolo, with Karin in great surprise, but extremely proud of the boy's progress and power.

After Goku kills Piccolo Daimao, Yajirobe brings Goku to the tower to heal his wounds. Goku tells Karin that Shenlong was killed by Piccolo and there is no way to revive all the people that were killed. Karin then tells Goku about the Guardian of Earth who is the creator of the Dragon Balls. Karin tells Goku to use his Nyoibo to get to Kami's Lookout, way above Karin's tower.

Karin appears in Dragon Ball: Mystical Adventure, which is an alternate retelling of Dragon Ball. When Goku lands in Karin Tower after being defeated by Tao Pai Pai, Karin gives Goku advice on helping him defeat Tao.

During the Garlic Jr. Saga, Karin and Yajirobe meet Kuririn's girlfriend, Maron. During this period, Maron notably convinced Karin and Yajirobe to cook for her, and played poker with them. He also is shown as having a weakness to being stroked on the chin, as Maron demonstrates when getting him to go her way, although the second time she did this, he snapped at her to stop doing that.

A few years later, after Cell has achieved his perfect form by absorbing Androids 17 and 18, Goku visits Karin after his training in the Room of Time and Space to show him his new power by powering up as a Super Saiyan. While Goku charges up, Karin demands for the Saiyan to stop, because if he carries on, his aura would be enough to make the Karin Tower collapse. Seven years after the death of Cell, Goku visits Karin again to get a Senzu bean for Videl who has been injured by Spopovich during the 25th Tenkaichi Budokai.

Korin was killed either when Evil Majin Boo used the Jinrui Zetsumetsu Kogeki or when Pure Majin Boo used the Planet Burst on the planet, but was revived by Porunga. Two years after Pure Boo's defeat, Karin is seen at Mr. Satan's party with Yajirobe.

During the events of the film, Goku ends up being severely wounded by taking the brunt force of an attack by Cooler that was intended for Gohan. In order to help Goku recover while in hiding from Cooler and his Armored Squadron, Gohan had to travel to Karin at his tower, although the cat declined his request because Gohan only climbed halfway up the tower (in the dub, it was because he did not try to give him a gift). Despite this however, he ended up having to let Gohan get a bean satchel as well as a spare bean anyways, primarily due to Yajirobe's interference (causing them to get into a severe argument).

Karin makes a cameo appearance in Dragon Ball GT, in episode 40 "Piccolo's Decision," when Kibitoshin saved him and Yajirobe from the Earth's destruction. He is also seen in one of the flashbacks in the final episode of Dragon Ball GT, "Until We Meet Again." 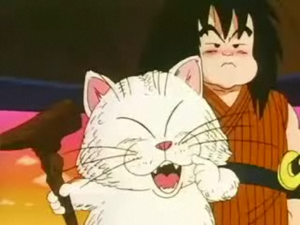 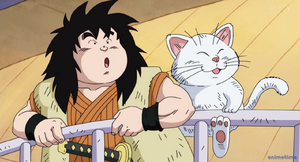 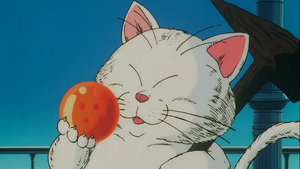 Retrieved from "https://hero.fandom.com/wiki/Karin_(Dragon_Ball)?oldid=2207464"
Community content is available under CC-BY-SA unless otherwise noted.