Flirting with Sasuke, beating up Suigetsu for pissing her off, collecting perfumes

Serve Sasuke and take him for herself
To protect Otogakure and Ninja world from oncoming evil threats.

In love Heroine, Obsessed Heroine, Lustful Heroine
Karin Uzumaki is one of the main supporting characters in the Naruto anime/manga series and the Boruto: Naruto Next Generations anime/manga series. She is a subordinate of Orochimaru who assisted him in his experimentations and was left in charge of one of his bases while he was away; and was also the only one loyal to Orochimaru to remain even though his current status is questionable. She has red eyes, matching hair color and an unusual hairstyle; her hair is short and unkempt on one side, and long and combed on the other. Karin will at times appear tough and in control and other times she is flirtatious. Karin's name means 'intense sulfur' and is also a homonym for the fruit 'quince'.

Sasuke Uchiha recruits her as a member of Snake. While Sasuke admits she may be troublesome, he also notes that her special abilities make her useful. She also seems to have a liking for Sasuke, implying to Sasuke that a team consisting of the two of them would be much better than one with Suigetsu or Jugo. Suigetsu noted that something once happened between her and Sasuke though what this means remains unclear, since she punches Suigetsu before he can finish his sentence.

Karin has crimson eyes, fair skin, and the characteristic red hair of the Uzumaki clan which she wears in an unusual hairstyle: her hair is short and spiky on the right side, while longer and straight on the left side. She wears brown narrow glasses, which have a serrated blade hidden in them, and her outfit consists of a lavender uniform that exposes her navel, short black shorts, and long black thigh high stockings with black sandals. Her chest, neck and arms are covered with bite marks that result from people biting her to heal, and all of which are hidden by her uniform.

As she is allied with Hebi, Karin begins to wear a pouch around her midsection, and later a black cloak. When allied with Akatsuki, Karin wears an Akatsuki cloak with a hood instead of a high collar. After the fight with Killer B, Karin briefly put her hair in a ponytail. She is seen wearing a black dress and black-rimmed glasses when it's decided that Taka will go to Konoha. Years after the Fourth Great Shinobi War, Karin began wearing a light-collared shirt and tie. She also buzzed off her hair at her left temple.

Karin took part in the Chūnin Exams held in Konoha on a Kusa-team alongside Shigeri and an unknown team-mate. After passing the written exam, Karin's team was given an Earth scroll and started from gate 25. During the second phase, Karin lost track of her team-mates and was attacked by a large bear. She was saved by Sasuke Uchiha who was disappointed to find she had an earth scroll as well, but she was able to catch a good glimpse of him and developed a crush on the Uchiha. Her team later failed as they didn't make it to the tower with both scrolls by the fifth day.

During her childhood, Karin lived in a small village that was burnt to the ground during a war. She was the only survivor, completely unharmed. Afterwards in another town, Karin was caught by two men after noticing her Uzumaki heritage and they planned on selling her in the underground market. Immediately Karin was saved by Orochimaru who had his snake attack the two. He then offered her protection since she was an outcast. After Orochimaru learned that her village was burned down, he asked her how she survived to which Karin said she could tell that huge groups of people were coming. Afterwards Karin was brought back to Otogakure, where she served as a jailer at one of his bases.

At some point, she was involved in experimentations on Jūgo and Kimimaro. Her impressive healing abilities were studied by Orochimaru and Kabuto with the latter successfully being able to replicate it. Unlike the rest of Taka, Karin was genuinely loyal to Orochimaru, going as far as to refuse to release Orochimaru's prisoners, and in the anime, having them killed for speaking of his death, even after his defeat.

About two years after Sasuke joined Orochimaru, he was sent to the Eastern Hideout to deliver a vial to help further research on Suigetsu. Soon after Sasuke completed his task, Suigetsu escaped his chamber (secretly allowed by Sasuke as a test). Karin was joined by Sasuke in an effort to recapture Suigetsu. Initially caught off guard by Suigetsu's special water technique, Karin was able to surprise and knock him out with her chakra chain.

Karin has a fluctuating personality; she will appear tough and in control at times, to the point of being violent and critical, and at other times will appear highly flirtatious. She possesses a strong dislike towards Suigetsu Hōzuki, whom she attacks whenever he decides to mock or berate her. In the anime, she stated that she was attracted to men based on their chakra quality, and claims that Suigetsu's chakra disgusts her. Sasuke Uchiha's chakra used to dazzle her, but it now scares her, due to it getting colder and darker from his hatred. Naruto Uzumaki's seems to calm and dazzle her as well, making her feel comfortable and relaxed due to it being warm and bright, though she also became scared after sensing an evil chakra within him.

Karin develops a fondness for Sasuke from the first day they met; when he saved her life during the Chūnin Exams. In the anime, she has a flashback of when Orochimaru sends her to assist Sasuke in capturing a horde of escaped prisoners. There, she is captivated by the level of Sasuke's chakra and develops a sexual attraction to him. Karin's strong fondness bordered on fanaticism. For example, it was revealed that she had kept one of Sasuke's sweat-drenched shirts. Karin would typically insist that she has no feelings for Sasuke around others, while frequently suggesting to Sasuke that they should spend time alone with the intention of freely expressing her feelings to him, only to switch back to acting cold when other people are present. Despite Sasuke's chakra becoming increasingly "darker", she still found him attractive. However, after he stabbed her in order to kill Danzō and tried to kill her, then even order Sakura to kill her to test Sakura's intent to join him, Karin stated that she no longer cares about him. Karin has also used other's perception of her feelings towards Sasuke to her advantage, feigning mental instability while imprisoned at Konoha to make the guards pay less attention to her. Upon her escape, she follows Sasuke's chakra with the intent of aggressively confronting him about the stab as she vents her rage by furiously beating Suigetsu, but with Sasuke's apology and Orochimaru's suggestion, she found herself unable to stay angry. She even puts Sasuke's well-being above her own. Despite not being a combatant of Taka, she rushed into the battlefield with virtually no weapons or protective gear when she senses that Sasuke was on the verge of death, paying no heed to how strong the enemy was.

Even after a few years, Karin still seems to have lingering feelings for Sasuke, but she is content with the knowledge that he is happy with his wife and daughter. Karin also seems to have a soft spot for Sarada (Sasuke's and Sakura's daughter), whom she helped deliver when she was born and was the one who gave her her glasses. 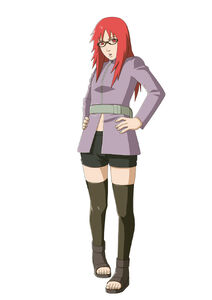 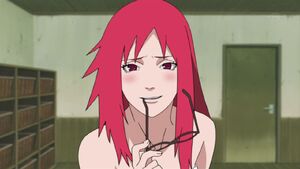 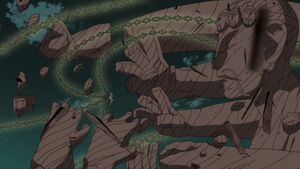 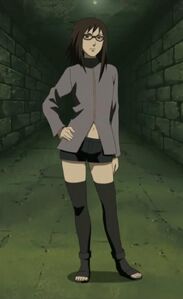 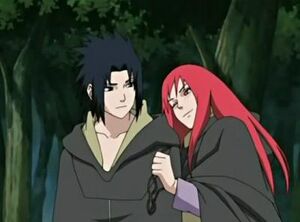 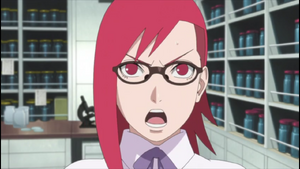 Karin in Boruto: Naruto Next Generations 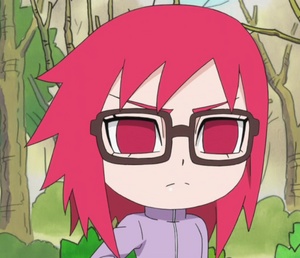 Retrieved from "https://hero.fandom.com/wiki/Karin_(Naruto)?oldid=2170499"
Community content is available under CC-BY-SA unless otherwise noted.