Head of the Kanzuki Zaibatsu

Become the strongest fighter in the world

Karin's laugh and mannerisms are derived from the unpleasant "ojou" stereotypes common in anime and manga and "rich person"/"popular schoolgirl"/"spoiled brat" stereotypes of Western animated cartoons and movies; while she typically remains snobbish and haughty as per the standard, other aspects of her personality can vary wildly in other media. This is very much evidenced in the Sakura Ganbaru manga series in which she made her debut. The rest of her high school class appear to do exactly as she tells them, referring to her as Miss Karin, despite being the same age. Karin, on the other hand, refers to them as "commoners."

Since she was young, Karin's father has demanded that she never be second-best at anything, as victory is the Kanzuki family creed. This led her to obsessively pursue Sakura, who handed Karin her first definitive defeat. In Alpha 3, she ran into Ken Masters, who told her that improvement and the thrill of fighting was more important than merely winning. After finally defeating Sakura again, Karin realizes that it was a fluke victory that could have gone either way and comes to understand Ken's advice. Upon her return in V, Karin has sincerely mellowed out and has made friends with both Sakura and many other top class fighters. She often challenges them to test both her skills and theirs, but never out of raw anger or contempt.

Karin developed a kinder, enough to shelter someone like Birdie, whom she would probably consider as lower than a commoner in her teenage years (even though, ostensibly, her reason is to prove she can be a master good enough that no underling of hers would betray her). She ends up being the driving logistical force behind most of the fighters getting together to combat Bison. She still has a rather haughty attitude, though.

Karin is from the wealthy Kanzuki family (daughter of Daigenjyuro and Nadeshiko Kanzuki), whose motto is "All you need is victory". Karin considers herself a rival of Sakura, whom she was defeated by when challenged. Karin uses the martial art of Kanzuki-ryu kakutojutsu (which is based on Chinese Kenpo). Karin made her first appearance in the 1996 Street Fighter manga Sakura Ganbaru! by Masahiko Nakahira. Later in 1998, she made her fighting game debut in Street Fighter Alpha 3.

During the timeline of SFA3, the Kanzuki corporation is threatened by Shadaloo, which then makes demands of the dynasty. Karin uses the family fortune when attempting to track down Shadaloo as well as a roving Sakura to challenge her again. Along the way, she encounters Blanka and defeats him in a friendly match, musing that "the world is so vast" for such a beast to exist. She also encounters R. Mika and battles her, and is so impressed by Mika's ability that she offers the wrestler her sponsorship. Karin eventually finds and defeats Sakura, but realizes the victory was a fluke, and that the fight itself is more important, not winning or losing (Ken Masters told her this previously). She lives by her motto more than the rest of her family, as she takes majority control of her father's company from under his nose in a hostile takeover (ironic since he was the one to drive that philosophy into her). Her family's estate covers 200 miles of land, and not only has its own geographical features, but its own climate.

Karin's butler, Ishizaki, appears in her win poses. Ishizaki is a pudgy but engaging middle-aged Japanese man with burly arms and a warm, welcoming smile. He is always willing to do what Karin wishes of him, though sometimes he wants to get in on the action and do battle. In addition, Ishizaki was assigned the job of baby-sitting/watching over Karin while she traveled the world, in search of a rematch with Sakura. Since he and her have such a close albeit rocky bond, he can be considered to be her closest friend in the Kanzuki mansion, as he is very proud of her and takes such good care of her.

Like Mika, she makes a return in Street Fighter V. She's ditched her school uniform for a new, fancier ensemble that still retains the feel of her classic outfit. She's taken in former Shadaloo soldier Birdie as a house guest, and gone on a quest to find a Senjutsu master, best known as Oro, who fought her grandfather many years ago. She's also evidently holding her own tournament in New York.

Karin appears in Super Smash Bros. Ultimate as a advanced-ranked primary grab-type spirit that gives the user a strong throw who can be obtained by completing a challenge by defeating 3 advanced spirits without a spirit team. Her spirit battle is a stamina battle against Lucario with increased move speed and reduced weight on Wuhu Island with decreased jump power.

Karin is the daughter of Daigenjuro; their butler is Ishizaki‎, and Shibazaki is the family steward. Karin's father Daigenjuro is a rather strict man as he constantly pushes his daughter into becoming a better heir to the Kanzuki family fortune, as he wanted a son. 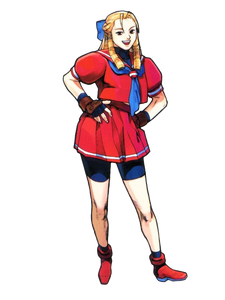 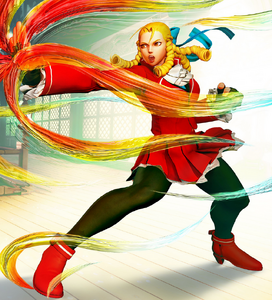 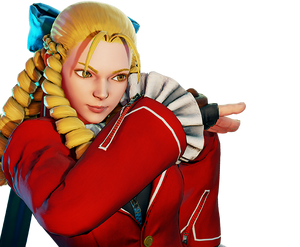 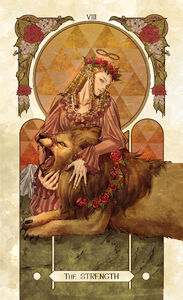 Karin on a tarot card (courtesy of Capcom artwork collection) 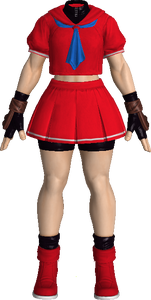 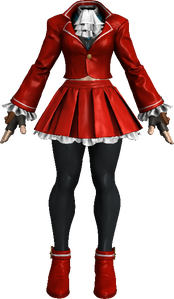