Lieutenant of the German Army

Karin Koenig is one of the main heroes of the video-game Shadow Hearts:Covenant. Up until the start of the game Karin has no experience with the supernatural, this changes when she encounters the Demon of Domremy.

The Demon of Domremy

Karin is a Lieutenant of the German Army during the year 1915 during the World War I, or 'The Great War' as it is referred to then. During an attempt to seize the French territory of Domremy Karin encounters a demon defending the town from her and her soldiers. Karin's unit found a Demon in the small community's church. The army's guns seemed to have no effect on the beast. When one of the soldiers resorted to using a grenade it only endangered the squadron with the demon remaining unharmed. Though Karin was about to take the main brunt of the blast the demon amazingly shielded her from the explosion. The impact of the explosion wound up injuring the squad more than the demon itself but no one was killed. Just before losing consciences Karin saw the demon leave and turn into a man.

Karin woke up in Germany custody several hours later. Karin reported what had happened to her superior officer, General Heimann. Heinmann was skeptical of the report but all the survivors had similar stories and Karin was apparently a highly reliable soldier, one Heimann believed. Heinmann was concerned and though he assured Karin the territory had no strategic significance for Germany in the War the honor of their country demanded that they not be made to look weak by allowing the small territory to be a hold-out from German occupation. Heinmann had been contacted by the Vatican once they heard of his problem and sent over a professional exorcist to help with the demon. The man was named Nicolai Conrad, and Heinmann assigned Karin to be his guide as the most decorated solider of the Domremy squad. Nicolai needed to return to the Vatican to retrieve a powerful exorcist tool called the Holy Mistletoe , he asked Karin to help as the Mistletoe was protected by monstrous guardians. On their way through the tower Nicolai explained the tower was once used during the Inquisition days of the Church to interrogate, imprison and torture heretics and though it was long since retired the remaining malice in the tower had attracted and created the many monsters that inhabited the tower and so it was used as a storage for powerful exorcist tools like the Mistletoe that the Church did not want falling into the wrong hands. Once at the top Nicolai and Karin encountered the main guardian of the Mistletoe, a Gargoyle. The two teamed up to quickly do-away with the Gargoyle and retrieved the Holy Mistletoe. With the powerful device in his hand Nicolai told Karin he could banish the demon from Domremy with ease and the two departed to reattempt to take the territory.

The Good Demon and Evil Man

Once back in Domremy Karin ordered her men to spread out and secure the parameter leaving Karin and Nicolai to lead the charge into the town themselves. Karin encountered toys and puppets. Though seemingly just toys the puppets were acting as conduits an unseen puppeteer magician that cast magic through them. Though a nuisance Karin and Nicolai still managed to make short work of the possessed toys thrown in their way. Some of the soldiers were concerned as many of their predecessors had wandered into the village before and not returned, in addition there was a wolf in the area that was also working with the demon and magical puppets. Nicolai knew they would find the demon himself back at the center of the village in the Church. Just outside the Church Karin found the freshly dug graves of the previous soldiers which conflicted with the Demon's previous restraint but showed that both it and the town's people had some level of respect for the fallen.

Once inside the Church Nicolai called out the demon. It arrived shortly to accept his challenge and turned into a young Japanese man. Nicolai addressed the half-demon as Godslayer, a nickname based on the young man's apparent exploits defeating a God. Nicolai drew his sword and attempted to fight the Godslayer. The young man did not even need to resume his demonic form to easily toss Nicolai around like a rag-doll. Overpowered, Nicolai brought in his ace-in-the-hole, he called in his back-up, a large man with several menacing soldiers Karin had never seen before, the man was holding a knife to a restrained peasant girl named Jeanne. Nicolai revealed he was part of a secret society named Sapientes Gladio. Nicolai was in fact a heretic that had infiltrated the Church and remained a contact within it for Sapientes Gladio. They referred to the man, Yuri Hyuga, as Godslayer because he had banished God after being he summoned forth by Sapientes Gladio's arch-enemy and the main villain of the previous game Albert Simon. Nicolai was cut-off though when Karin pulled a gun on his man once she had realized Nicolai was the one who had killed her men and was attempting to do the same to the young girl.Even with Karin now on Yuri's side Nicolai managed to use the Mistletoe on Yuri sealing his demonic powers.

Though Jeanne and Karin's remaining soldiers had been killed by Sapientes Gladio Yuri's allies had still managed to get Yuri and Karin to safety. Karin wanted to make things up to Yuri and his friends, Gepetto, the puppeteer and Blanca the wolf. Karin continued to travel with them and aided them in trying to find a cure for the curse and defeat Sapientes Gladio.

Karen is new to the concept of the supernatural at the time the game begins, leading he to act as audience surrogate for a good deal of explanations about magical terms and monsters. Though Karen adjusts to the concept of monsters and magic steadily, her real issue comes in adjusting to her feelings for her party members. Karen is shown to be a dutiful lieutenant in the German army but once her team is wiped out she becomes introverted and nervous. She has trouble expressing fondness, sorrow or pain to her team-mates. Karen's less than outgoing emotional side does not in any way affect her confidence as a warrior, she is glad to leap into danger and encourage others to fight through any obstacle. Karin develops feelings for Yuri as the game goes on however she can see he only has feelings for Alice and so she remains his friend rather than undermining their relationship by admitting her love.

Actually she does admit her love to her so I can she undermined their relationship.

Karin uses a German rapier, which she coordinates with opera pieces. The various operettas she picks-up let her pair old styles with modern fighting techniques, allowing her to create optimal strikes through synchronization. Karin is initially one of the only solid fighters. Her adaptability to magic is minimal but the damage she can inflict with her fencing skills will make-up for her initial difficulty with magic. Karin will adapt to magical attacks early in her leveling. After her early deficiency in magic, both it and her physical attacks become comparable to each-other. Karin never excels in any one area, she will remain one of the most balanced characters in the game. Her speed, health, will-power, mind and strength all remain close as stats. Similar to Margarete of Shadow Hearts, she will never surpass any one stat of her team-mates however she will not be weak in any one stat either. 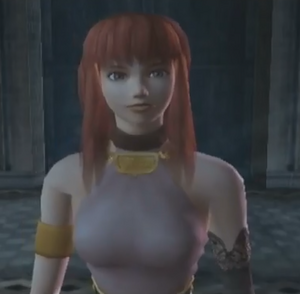 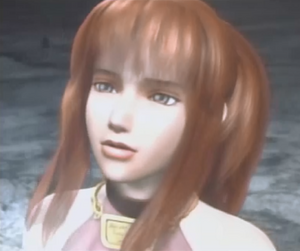 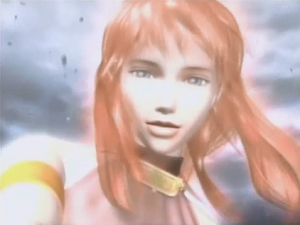 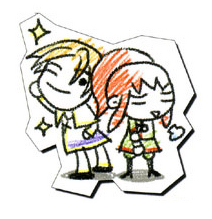 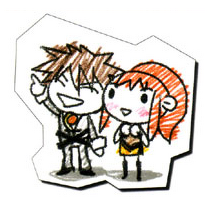 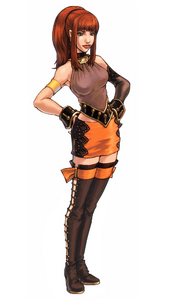 Add a photo to this gallery
Retrieved from "https://hero.fandom.com/wiki/Karin_Koenig?oldid=1857521"
Community content is available under CC-BY-SA unless otherwise noted.